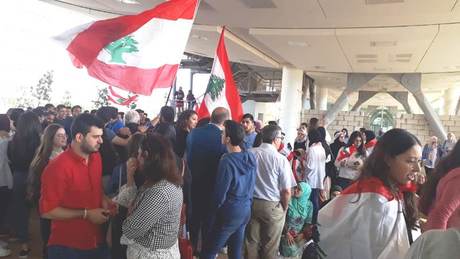 Protests continue in Lebanon Monday as an unprecedented protest movement against the ruling elite entered day 33 with the country in the grip of political and economic turmoil.

In north Lebanon, and other areas students led the protests as they skipped classes with some blocking the entrance to the Beirut Arab University branch in al-Dibbiyeh. Others at the Lebanese University refused to attend classes.

Students held a sit-in in front of the offices of the Finance Ministry in Tripoli preventing access for employees. They also blocked several state institutions.

In Beirut they rallied in front of the Education Ministry.

Demonstrators are demanding a complete overhaul of the political class and for a new government of technocrats not affiliated with traditional parties.

Protests have somewhat calmed down in Beirut, but are all prepared to ban the parliament from convening on Tuesday. They have called for the formation of a human chain around the parliament premises in Beirut's Nejmeh Square.

Speaker Nabih Berri had several times postponed a legislative session to elect the secretariat and committee members. Last week he rescheduled it to November 18.

The leaderless pan-sectarian movement has swept the Mediterranean country since October 17, prompting the resignation of Prime Minister Saad Hariri's government.

Protesters have decried everything from unemployment to chronic power cuts and say they are fed up with the same families dominating government institutions since the end of the 1975-1990 civil war.

No date has been set for parliamentary consultations required to pave the way for a new cabinet line-up and the country has been paralyzed by school and bank closures.