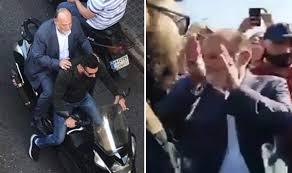 Footage of Hizbullah MP Ali Ammar riding a scooter near parliament and chanting with protesters besieging the legislature’s building has gone viral on social media in Lebanon.

A video shows Ammar arriving on foot to a road-blocking protest near parliament, where a controversial legislative session was due to be held.

Ammar then engages in an apparently friendly chat with protesters before leaving the area.

Another video shows Ammar raising his fist in the air and chanting “down with the rule of thugs” with protesters as he arrives to another road-blocking point.

Ammar is seen smiling in most of the videos.

A picture circulated on social media meanwhile shows him riding a scooter driven by an unidentified person. It was not immediately clear whether he was arriving or leaving the parliament area.

Social media users meanwhile lauded the peaceful behavior of both protesters and the Hizbullah lawmaker.