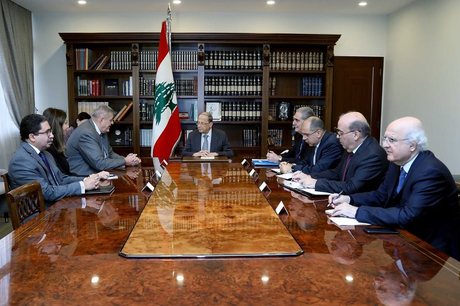 President Michel Aoun on Monday expressed relief over the meeting that the International Support Group for Lebanon will hold Wednesday in Paris, thanking France for making the initiative in coordination with the U.N.

Aoun’s remarks were voiced in a meeting with U.N. Special Coordinator for Lebanon Jan Kubis.

The president told Kubis that Lebanon will send an official delegation to the meeting, hoping it will yield practical results, especially amid “the critical economic circumstances that the country is going through.”

Kubis for his part briefed Aoun on the measures that have been taken in order to convene the meeting, noting that the event will send a strong signal on ISG’s commitment to helping Lebanon.

The meeting will be held amid the absence of an active government in Lebanon, a dire economic and financial crisis, and unprecedented street protests against the entire political class.

I have the utmost respect and deepest admiration for General Aoun who is now president and a Shia Imam for relieving himself over Lebanon Support Meeting.

I will make it short and simple... As long as Ebola will keep its weapons, we shall not get significant help!

Read thoroughly the Cedre agreement. You will understand my point.

Salim Jreisati is sitting in the wrong place. He should be front and center where the president sits as he's along with Bassil are the ones running the president's office.