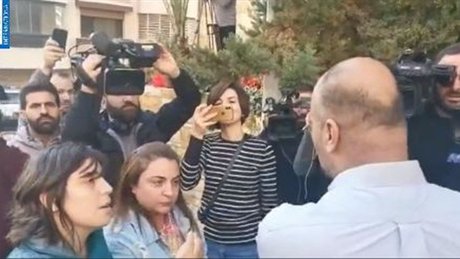 Anti-government protesters on Sunday rallied outside the house of PM-designate Hassan Diab to denounce his meeting with a number of figures claiming to represent the protest movement that emerged after October 17.

The head of the so-called Lebanese Media Bank, Mohammed Noun, said he met with Diab in his personal capacity, calling for “cooperation and dialogue with the PM-designate in order to rescue the situation” and describing Diab as an “independent figure.”

Noun also called on Diab to “pay attention to the Bekaa region and benefit from its resources, especially the Assi River,” decrying the “deprivation” of the Bekaa and Baalbek regions.

Verbal clashes meanwhile ensued between Noun and a number of protesters outside Diab’s house in Tallet al-Khayyat.

LBCI TV said Diab did not meet with any “influential groups” from the protest movement but rather with some individuals who said that they do not “represent the revolution.”

The TV network identified the figures as Mohammed Noun, Walid Itani, the journalist Waad Hashem and a person from the al-Hajjar family.

Protesters outside Diab’s house stressed that the aforementioned figures do not represent the protest movement.

"Not a single group actually active on the ground met today with the prime minister-designate because they are not convinced" he can form a government of technocrats, said Wassef Harakeh, a prominent activist.

"They want us to get mired in this game of consultations," he told AFP.

In the protest camp in central Beirut, crowds began gathering in the afternoon.

"The people that visited the prime minister-designate today do not represent the revolution," said Ali Haidar, a resident of Beirut's southern suburbs.

"These talks were a failure," he told AFP from the protest camp.

The area outside Diab’s residence also witnessed a sit-in by a group that supports caretaker PM Saad Hariri.

Diab had announced that he would meet with representatives of the protest movement as part of his consultations to form a new government.

He is following the written script to the T.