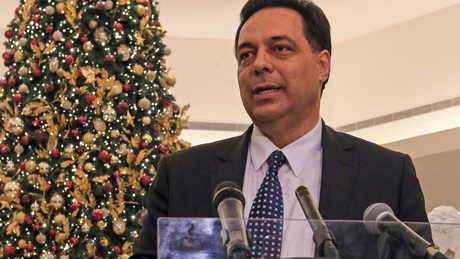 Arab diplomatic sources told the daily on condition of anonymity that there was “no Arab approval of Diab” and that his designation will reflect on the form of the new government “especially after reports that he visited Damascus and met with officials of the Syrian regime.”

Arab states were “willing and ready” to provide economic assistance for Lebanon, said the sources, but the Gulf Cooperation Council’s assistance “was excluded after revelations that the formation process is completely politicized and one-sided.”

The sources noted that Arab countries are watching the position of Dar al-Fatwa, the highest Sunni authority in Lebanon, which has not so far given its "blessing" for the designation of Diab.

But while his appointment was backed by Hizbullah-allied parliamentary blocs, he did not win the backing of parties from his own Sunni community.

And this is one of the reasons why the government won't be formed soon--they wanted to form the government next week, but when the international community said no bueno, they had to step back. Aside from no Arab aid, no world bank aid, no CEDRE funds, no western support of the currency and no confidence, they are doing great.

What do Lebanon and its 'Strong' president expect?

Not a single penny should come to this failed state of hezbollah.

Diab’s premiership is going nowhere. The Sunni “President” selected by Hezbollah has no political base, no Parliamentary party. True Aoun is the Maronite “President” selected by Hezbollah, as well, but Aoun has a constituency, a political base and seats in the Parliament for his Party, the FPM. Aoun is more legitimate in office only because of the charade of his party, which is propped up by Hezbollah. Diab lacks even the Ts what makes this so brazen and Diab so crippled from the start.

Ebola chose the President, The Prime Minister, and the President of the Chamber. Lebanon will NEVER see a penny from the rest of the world under these conditions.

what exactly is your goal here? Other than making a fool out of yourself.