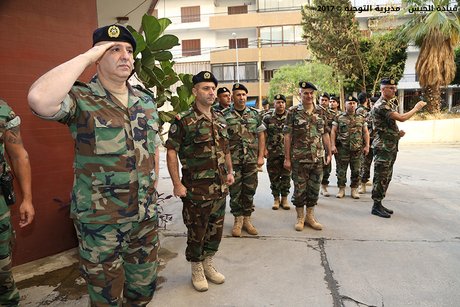 Army Commander General Joseph Aoun on Monday noted that “a day will come when it will be said that the army has rescued Lebanon,” referring to the military’s approach in dealing with the unprecedented protests that have been rocking the country since October 17.

“The army’s approach towards civilians is based on the military institution’s belief in the right to assembly and freedom of expression, but this does not at all stand for leniency with any security violator, unethical actions or road-blocking moves,” Aoun said as he inspected the command of the Sixth Intervention Regiment in Riyaq.

“A day will come when it will be said that the army has rescued Lebanon,” Aoun added.

Lauding the armed forces’ “composure and restraint in dealing with the protests,” the Commander pointed out that their behavior has won “the praise of international institutions, especially when compared to similar circumstances in other countries.”

Although protests have declined in size, demonstrations have been ongoing since October, increasingly targeting banks and state institutions blamed for driving the country towards collapse.

The movement has been fueled by a crippling economic crisis, the worst since Lebanon's 1975-1990 civil war.

Michel Aoun shall be remembered in the books as the most pathetic President of the Lebanese History!

and it isn't even close.

He still has no idea what is going on or what the protests are about.

Isn't that your job in the first place?