Protesters Injured in Sidon as Scuffles Erupt on Ring Highway 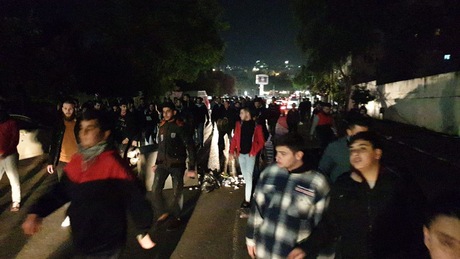 Scuffles erupted Monday evening on the Ring highway in central Beirut after security forces tried to reopen the road, which was blocked by anti-government protesters.

Several people were meanwhile injured in scuffles between the army and protesters at Sidon's Elia square.

MTV said protesters blocked most internal roads in the city after the scuffles.

Several arrests were also made during the confrontation.

Many roads were meanwhile blocked in the northern city of Tripoli.

Although protests have declined in size, demonstrations have been ongoing since October 17, increasingly targeting banks and state institutions blamed for driving the country towards collapse.

The movement has been fueled by a crippling economic crisis, the worst since Lebanon's 1975-1990 civil war.