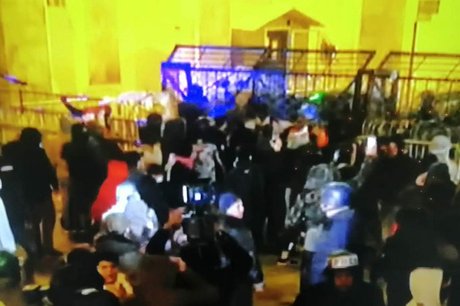 Security forces on Sunday fired rubber bullets, tear gas, pepper spray and water cannons at stone-throwing protesters in central Beirut, a day after almost 400 people were injured in the fiercest clashes yet in the protests that have been rocking the country since October 17.

Some protesters had charged at riot police with metallic barriers and rods. Some of them later started hurling stones and firecrackers at riot police guarding Nejmeh Square.

Hundreds of anti-government protesters had converged on the center of the capital Sunday afternoon despite the rainy weather.

Nearby, the army’s Commando Regiment deployed heavily with dozens of vehicles and troops, some of whom were carrying shoulder-fired missile launchers.

"Revolutionaries, free people, we will complete this path," some protesters chanted, some wearing colorful waterproof ponchos or clutching umbrellas.

A protester called Mazen said he and others were "fed up with politicians."

"After three months of revolution, they have proven to us that they don't change, don't listen, and have nothing to give," the 34-year-old said.

Protesters have demanded a new government be comprised solely of independent experts, and exclude all established political parties they accuse of being motivated by personal and partisan gains.

The World Bank has warned the poverty rate in Lebanon could rise from a third to half of the population if the political crisis is not resolved soon.

lol @ 'some of whom were carrying shoulder-fired missile launchers'