U.N. Condemns 'Vandalism' and Use of Force against Lebanon Protesters 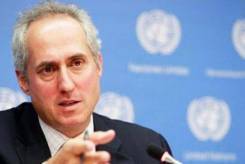 The United Nations on Monday condemned the use of force against Lebanese protesters at the hands of riot police.

But the vast majority of protesters are peaceful "and they need to be protected," he added.

Lebanon has been rocked by mostly peaceful anti-government rallies since October 17 but the protests turned violent over the weekend amid political stalemate and an ever deepening economic crisis.

On Saturday and Sunday night demonstrators, who had called for a "week of rage", lobbed stones, firecrackers and street signs at riot police, who fired tear gas and rubber bullets to clear a road leading to parliament.

The escalation saw more than 540 people wounded on the two sides and came as wrangling delayed the formation of a new government to replace that of Prime Minister Saad Hariri, who quit last year in the face of street protests.

The violent protests, confrontations with army/security, and destruction of businesses and bank properties are the Thawra worst nightmare and what Hizb-FPM-Amal are praying for to discredit the movement. This is a catastrophic mistake just when the true peaceful Thawra was about to assemble a million-person march that cannot be ignored and can impose early elections. Remember Assad releasing thugs and radicals from prison to paint all demonstrators as terrorists and how Iran justified brutally crushing the demonstrators to save properties. Thawra leaders should immediately distant the movement from all violence and focus on educating people on the reasons for our economic misery and absence of investments due and all Lebanese-American writing their senators to put Bassil on US sanction list for selling Lebanon to Iranian Basij via Hizbollah.

First disassociate the Thawra from any act of Violence. Second, a million-person march demanding parliament resignation. Third if no resignation, a total civil disobedience, refusal to pay all taxes, stop all work. Fourth, form a shadow government to interact with world governments informing popular refusal of Hizbollah's government and its useful idiot so no penny is given in international aid until new parliament elections to turn the page on this Aoun-Bassil-Hizbollah nightmare.

You ll March a million we ll march 2 million.
Nothing more than looters and drug dealers destroying downtown Beirut.