Lebanon at a Crossroads after 100 Days of Protests 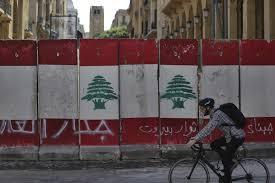 When Nazih Khalaf heard that protests were taking place Oct. 17 in Lebanon's capital over government plans to impose new taxes, he was just returning from south of Beirut where he'd been working to put out deadly wildfires that had been raging for days.

The 42-year-old media activist hopped in a shower and without hesitation headed to Beirut, invigorated by the thought of demonstrations targeting a political class accused of decades of political corruption and mismanagement.

Khalaf hasn't left downtown Beirut since. Now, 100 days after the nationwide uprising against the country's hated political class erupted, Lebanon is at a crossroads, and Lebanese are more divided than ever.

"We have protested for 100 days in every sort of way," Khalaf said. "We chanted slogans, had sit-ins, closed roads, we stood in front of the central bank, in front of the Parliament just so those in power hear our voice and understand that they are really responsible for us."

A new government was formed Tuesday, and protesters -- even though they've rejected it as a rubber stamp for traditional political parties -- are now split over whether to continue protesting or withdraw from the streets to give the new Cabinet a chance. The peaceful, jubilant protests that characterized the first three months of the uprising have turned violent, and a worsening financial crisis is taking its toll.

Khalaf has been sleeping in a tent that he pitched alongside other protesters and launched a hunger strike earlier this week in exasperation at the political class' ineptness.

"Unfortunately, for 100 days, they have not listened to us and this new government is the same. In their view, we are not actually people. We are a group of sheep," said Khalaf from his tent, heavily fatigued after four days of only consuming water and salt.

Another point of division among the Lebanese protesters has been over tactics. Many are frustrated with the frequent roadblocks that have occurred throughout the country.

"I supported the protests at first but when it came to a point where the blocking of roads affected my mom's doctors' appointments or my freedom to go to work, then I stopped supporting it," said a woman who works in management at American University in Beirut. She refused to give her name, fearing it would spark controversy among her friends and colleagues.

Ihab Abu Fakhr is the older brother of Alaa Abu Fakhr, who was shot dead Nov. 12 by a soldier trying to open a road closed by protesters in southern Beirut. He came to central Beirut on Friday to meet with protesters over future plans.

"If I don't stand up against (the new government), it's as if I am burying my brother's cause under the ground," he said, sitting in one of the tents in downtown among a group of 10 other male protesters.

Some Lebanese are also frustrated at what they view as "thugs" or "infiltrators" who have turned to rioting and vandalism, smashing shop windows and throwing rocks and tiles at police during protests.

Mohammed Saab, a 19-year-old taxi driver, vehemently shook his head at the description of protesters as troublemakers and said that violence from protesters is justified.

"Open your eyes a bit because these people are really hungry. I am with the violence now and the destruction. ... The people who say 'peaceful peaceful' went out for a bit, they danced, sang, played and then went home. No, this can't be peaceful. This revolution needs destruction."

For the past week, a few hundred protesters have engaged in some of the most violent confrontations with security forces in the capital. More than 500 people, including over 100 security forces, were injured in nightly clashes outside the parliament building. Protesters hurled stones, firecrackers, flares and a few Molotov cocktails at security forces who responded with rubber bullets, tear gas and water cannons. Several protesters were hit in their eyes and at least two protesters were partially blinded.

On Wednesday, groups of young men rampaged through Beirut's commercial district, smashing window shops, cafes, banks and other businesses. They ripped tiles off luxury buildings and broke them up to use as stones to throw at police.

On Friday, security forces were putting up cement barricades, blast walls and additional barbed wire across the downtown area, blocking the path to major government buildings.

Banks stepped up their security and some shops were installing fortified windows and doors, anticipating more violence.