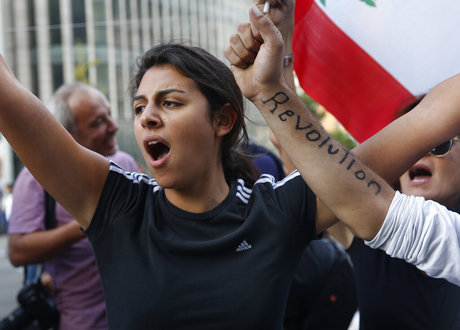 Unemployment rate in Lebanon has hit dangerous levels with 300 thousand individuals left jobless amid an unprecedented economic crisis sweeping the country since October.

An-Nahar daily on Wednesday said the numbers reflect a “tragic” situation in Lebanon where unemployment figures have reached 40%, and around two million Lebanese will live below the poverty line.

The daily said that 785 restaurants and cafes closed down between September 2019 and February 2020, 25 thousand employees were expelled from restaurants and hotels. 120 establishments closed down in Sidon. Jewelry stores moved their merchandise from malls to safer shops, and some returned them to their parent companies abroad.

Moreover, dozens of troubled institutions slashed salaries to a half. Banks imposed (illegitimate) capital controls on funds, with the possibility of deducting parts of the deposits in a “haircut” procedure, it added.

In view of these facts, the visit of the International Monetary Fund delegation does not provide much hope for solutions to Lebanon's chronic problems, said the daily.

Tony el-Ramy, president of Syndicate of Owners of Restaurants, Cafés, Night-Clubs and Pastries in Lebanon, revealed to the daily the latest figures saying 785 institutions dealing with food and drinks closed down between September 2019 and February 2020.

Since the start of the crisis, the number of unemployed reached 160 thousand people, according to an Infopro study.

"The number of unemployed people includes discharged employees and disguised unemployment, which in this case cuts part of the employees’ wages to low levels that affect people's capability to live a decent life," said economist Professor Jassim Ajjaqa.

Former Minister of Social Affairs Richard Kouymjian sounded the alarm saying: “Two million Lebanese will live below the poverty line in 2020 if the new government does not give special attention to this issue. The situation has reached dangerous levels in Lebanon.”

and of course our bright politicians will pin this on the protest movements in order to flee their responsabilities....