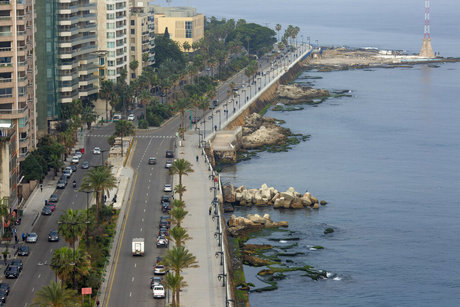 Lebanon went into lockdown Monday after the government announced a two-week state of “general mobilization” and ordered the closure of public and private institutions as well as the country’s airport and land and sea ports of entry.

Traffic was thin across the country and in some cases streets were completely empty on Monday, the start of the working week. Restaurants, cafes and bars have been closed since last week and most private businesses were also shuttered Monday.

In some areas, police were going around and asking shop owners to close in line with the government orders. Few people could be seen at Beirut's seaside corniche, and police were asking them to leave. Pharmacies, bakeries and other businesses related to making or selling food were allowed to stay open. The small country has reported 109 cases and three deaths from the new coronavirus.

Hamra Street, the capital's most famous shopping street and a residential district, was eerily quiet as shops, restaurants and cafes along the usually bustling thoroughfare were closed.

Beirut’s Rafik Hariri International Airport will close from Wednesday until March 29, while no one will be allowed in through maritime or land ports of entry during that period.

Most institutions and businesses would remain closed. Security forces, health institutions, utilities companies and shops selling food will be exempted.

Lebanon's novel coronavirus outbreak is the latest crisis to hit a country reeling from a severe economic crunch.

President Michel Aoun on Sunday announced a "health emergency" and also called on Lebanese to stay at home.

"All of us are called upon to continue our work from home," he said in a televised speech.

In recent days, Lebanese media and social media users have launched a campaign calling for social distancing, under the Arabic-language hashtag "Stay at home".