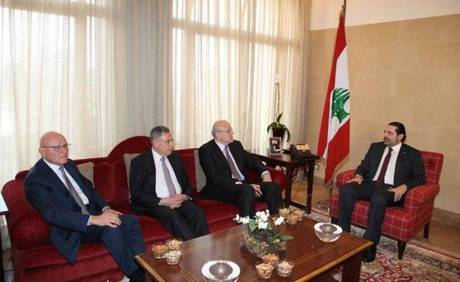 Former premiers Saad Hariri, Fouad Saniora and Tammam Salam met yesterday with ex-PM Najib Miqati at the Center House and did not endorse his initiative for the formation of a new government, media reports said on Thursday.

LBCI television added that Hariri is “inclined to escalate his stance by declaring that he is not nominated” for the PM post and that “he will not nominate anyone.

“Let the majority name its candidate and form its government,” LBCI quoted Hariri as saying.

Miqati had on Wednesday evening announced that he nominates Hariri for the premiership. He also said that he himself is not running for the post amid the current circumstances.

The ex-PM’s initiative calls for the formation of a techno-political government comprised of 14 technocrats and six political ministers.

President Michel Aoun has scheduled the binding parliamentary consultations to name a new PM for October 15.