Mixed Reaction in Lebanon as Indirect Talks with Israel Begin 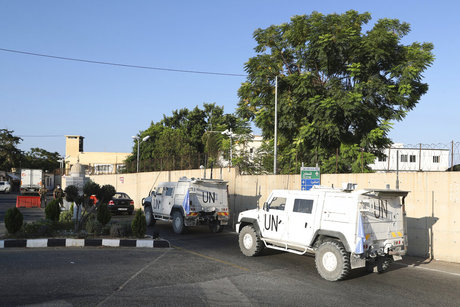 Hilal Khashan, a political science professor at the American University of Beirut, has said that a Lebanese-Israeli agreement on maritime border demarcation is the "best option for Lebanon so that it could start work in Block 9."

But he questioned the timing, saying it was likely scheduled by the Trump administration ahead of presidential elections so it can chalk up a "new foreign policy accomplishment."

Reactions to the talks have been mixed in Lebanon, still reeling from a huge August 4 explosion at Beirut port that killed more than 190 people and dealt another crippling blow to Lebanon's economy.

Hizbullah critics on social media have described the talks as contrasting with the powerful Iran-backed movement's anti-Israel stance.

The pro-Hizbullah Al-Akhbar daily on Monday called them "a moment of unprecedented political weakness for Lebanon," arguing that Israel is the real "beneficiary."

Hizbullah is both an armed group that has fought several wars against Israel and a major force in Lebanese politics, with seats in parliament.

On Thursday, its parliamentary bloc stressed that demarcating Lebanon's disputed maritime border with Israel does not signify "reconciliation" or "normalization."

Hizbullah and its ally the Amal Movement issued a statement overnight objecting to the composition of the Lebanese delegation to the negotiations.

They expressed reservations that the team to includes civilians, calling for the delegation to be reformed so that it only includes members of the military.

"This harms Lebanon's position and interests... and amounts to giving in to the Israeli logic that seeks some form of normalization," they said.

The same delegation that the two groups objected to later concluded the first round of indirect negotiations with the Israeli side at UNIFIL’s headquarters in Naqoura.

Following a 2006 war, regular talks between Israeli and Lebanese army officers were reestablished under UNIFIL's auspices.

As well as the discussions on the maritime border to be facilitated by the U.S., a UNIFIL-brokered track is also due to address outstanding land border disputes.

Khashan of AUB said these negotiations would be more complex as they would undoubtedly raise the issue of the formidable arsenal held by Hizbullah, the only Lebanese group not to have disarmed after the civil war.

"Hizbullah will not agree to give up its arsenal," he said.

So what Hizballah is in effect saying is "To hell with the economy of Lebanon. As long as we prevent the talks with Israel and the gas doesn't flow into Lebanon we are happy."

bigjohn, just for your information nobody pays me for what I write and have written over the years on Naharnet. As someone who worked for over 30 years in public relations, I feel that I know exactly what I am talking about when I write on this site and don't need any prompting from anyone else.
As for the second part of your statement, what has the internal situation in Israel got to do with the talks with Lebanon.