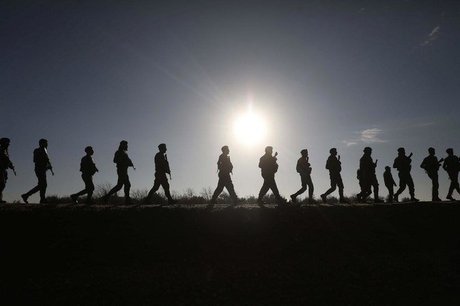 Human Rights Watch Wednesday condemned the "illegal transfers" to Turkey of more than 60 Syrians arrested by Ankara and its local proxies in Syria's northeast in 2019.

Turkey and its Syrian rebel proxies arrested the 63 Syrians between October and December 2019 in the border area of Ras al-Ain in Syria's northeast, after seizing the region from Kurdish fighters, the rights group said.

The men, Arabs and Kurds, are being held over their alleged links to Kurdish groups viewed by Ankara as "terrorists", according to HRW.

They have been charged with "undermining the unity and territorial integrity of the state, membership in a terrorist organisation, and murder", the rights group added.

"Not only have these Syrians been illegally transferred to Turkey for abusive prosecutions, but in an extraordinarily cruel move, the courts have imposed the highest sentence possible in Turkey –- life without parole" -- on at least five of them, said Michael Page, HRW's deputy regional director.

Turkey and its Syrian proxies seized control of Ras al-Ain during an October 2019 offensive that saw it wrest a 120-kilometre (70-mile) long strip of land from Kurdish forces on the Syrian side of its southern border.

Turkish authorities have not produced evidence that the detainees committed crimes or were active fighters with Kurdish groups, HRW said.

"Turkish authorities, as an occupying power, are required to respect people's rights under the law of occupation in northeastern Syria, including the prohibition on arbitrary detention and on the transfer of people to their territory," Page said.

"Instead, they are violating their obligations by arresting these Syrian men and carting them off to Turkey to face the most dubious and vaguest of charges connected to alleged activity in Syria."

While HRW said it could only confirm 63 transfers, it said available evidence suggests the number of Syrians taken to Turkey could be almost 200.

The alleged arrests and transfers are only the latest violations Turkey and its Syrian rebel proxies are accused of carrying out in areas under their control.

UN High Commissioner for Human Rights Michelle Bachelet warned last year of growing violence and criminality in areas captured by Turkey and its Syrian proxies, including in Ras al-Ain.

Her office has reported a pattern of violations in recent months, including increased killings, kidnappings, and seizures of land and properties.

Those who are critical of Turkey and its armed groups bear the brunt of these violations, the UN said.