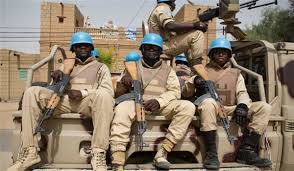 Around 20 United Nations peacekeepers were wounded in an attack on their base in central Mali on Wednesday, a U.N. spokesperson said, offering a provisional toll.

Militants attacked a temporary base near Kerena, a village in the war-torn center of the Sahel state, at around 7 am.

Olivier Salgado, the spokesman for the U.N.'s 13,000-strong MINUSMA mission in Mali, said the position was "targeted by direct and indirect fire."

Mali has been struggling to contain a jihadist insurgency which first emerged in in the north of the country 2012, and has since spread to the center of the country and to neighboring Burkina Faso and Niger.

Thousands of soldiers and civilians have been killed and hundreds of thousands of more have had to flee their homes.

Central Mali is one of the epicenters of the regional conflict, where attacks on soldiers and ethnic killings are common.