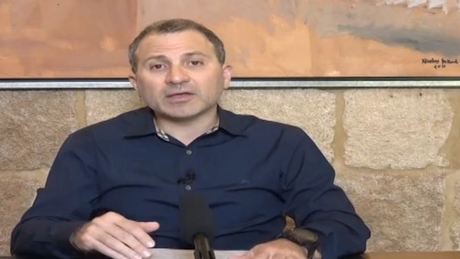 Free Patriotic Movement chief Jebran Bassil on Sunday said Speaker Nabih Berri has not been an “impartial” mediator in the cabinet formation process, urging Hizbullah leader Sayyed Hassan Nasrallah to step in as a “friend” and “referee.”

“I, Jebran Bassil, without putting any burden on you, would accept what you would accept for yourself. These are my last words regarding the government,” the FPM chief added.

He noted that the cabinet formation crisis has unveiled “more dangerous and deeper crises -- the crises of the system, constitution, practices and intentions.”

“We're defending our rights to protect our free existence,” Bassil said, in an apparent reference to the Christian community.

“You want to coerce us to take our vote of confidence in order to implicate us, hold us responsible and draw people’s ire against us,” Bassil went on to say, addressing PM-designate Saad Hariri and his allies.

“You will not take from us through pressure and people's pain and crises, nor through sanctions from the entire world, what you did not manage to take from 2005 until today. You are bothered by partnership and you do not want to respect jurisdiction! You also do not want reforms and you only want to get rid of us! You will not succeed in this!” Bassil added, referring to political rivals such as Hariri, Speaker Nabih Berri and Progressive Socialist Party chief Walid Jumblat.

“This is called tripartite power-sharing and it is rejected!” he emphasized, referring to a system in which Christians, Sunnis and Shiites have equal shares in power.

Bassil is so cute he thinks he can blackmail hassan nasralla.

Bassil speaks for himself and his thugs! Not for the Christian community!

Bassil is the definition of Grand Treason, in addition for being the most disgusting and evil person in Lebanon. Any Lebanese with half a brain knows Lebanon is under Iranian occupation via HizbIran so called Hizbollah. An Iranian militia with brainwashed Lebanese responsible for protecting corruption, assassinating our leaders and opposition, and destroying our economy, democracy, sovereignty and independence. Hope Thawra lawyers are working on Bassil's file so we'll make sure him, Aoun, FPM leaders, and all traitors and corrupts rot in prison.

Bassil: You want to coerce us to take our vote of confidence in order to implicate us, hold us responsible and draw people’s ire against us.

If you don't want to give the government a vote of confidence then why do you insist on naming 12 Christian ministers? and who appointed you as a spokesperson for the Christians in Lebanon?

You probably know this as well: Bassil wants Hariri to fail and he will do that through the ministers he insists on naming. On the other hand, he will keep attacking the government and its failures that he contributed to in order to gain street popularity in preparation for the elections. He is so transparent and we all can see through him. He is really evil and corrupt.

Nasrallah is a coward, he’s known for running with the hare and hunting with the hounds. He doesn’t stand by his allies whether it’s in corruption, terrorism etc.

Unfortunately for you Bassil this is the reality of the constitution! The Taef accord put the decision making process in the hands of the government which is shared equally between Moslems and Christians. So, stop your sectarian BS propaganda you pos!

"the_roar:
Ladies and Gentlemen: Today you have just listened to the future president of Lebanon. Learn people, learn!"

"constantine 1 hour ago
Without the FPM at the helm there would be no Lebanon.
Lebanon would be a province of ISIS reporting to Riadh.
The reason why Minister Bassil is being subjected to harsh criticism by thieves and traitors to stop him from taking their riches and beating them in the national treasury."

libanaisresilient 13 hours ago
OMG another big step towards the Presidency! Long live Bassil! You're the Man!

Bassil's yet to understand that the fear mongering and lies that worked in 2005 are no longer working in 2021 not even amongst most FPM supporters.

So now he wants 50% of the government! And for the last 10 months he has been blatantly denying he wants one third veto power in the government. He truly is a lowlife who uses 'Christian' rights for his own agenda of corruption.

Gebran Bassil put together this flash press conference directly speaking to his base to circle the wagons after Josep Borrell hinted, in his meeting with Michel Aoun, of new sanctions on Bassil, corrupt Tayyar cadres and Aoun's own advisers.