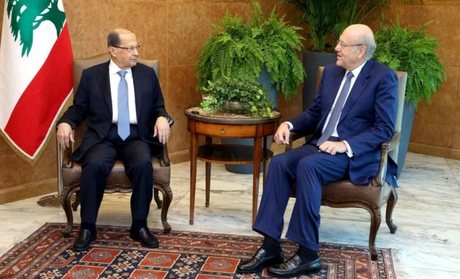 Prime Minister-designate Najib Miqati warned Monday after meeting President Michel Aoun in Baabda that the timeframe for the cabinet's formation is “not open-ended.”

“I was honestly hoping for a faster pace in the cabinet formation process and I was hoping for a government before the August 4 anniversary,” Miqati said after the talks.

Noting that he wants to preserve the “same confessional distribution of portfolios” that was followed in Hassan Diab’s government, in order to avoid further complications, the PM-designate said he agreed with Aoun to meet again on Thursday.

Once again the problem lies with Aoun and his corrupt sectarian party. Miqati is facing the same obstacles the two previous PM designates faced: Aoun/Bassil unreasonable and unconstitutional demands.

Excellent comment... it shows you have in depth knowledge of agriculture.

Haha good one. Perhaps he should ask to be the next minister of culture and agriculture. Lmao

i tell you what Mr president and bassil does not have any good intentions toward the lebanese people, now check this out, things can get out of control really fast and then it is going to be too late to repent, trust me. you need a government that does not sleep as soon as possible and for some reason these 2 jokers keep on sticking out like a hick up in the throats of the lebanese people

were you not the one who only yesterday was threatening us with another civil war and another May 7? stfu and go take a hike!

the four letter word after 'in' really describes the lowlife incognito.

We became corrupt/ individualistic pieces of shit during the civil war, when they taught us (the same people around today) that it was the shia/sunni/ maronite/druze's fault... When in reality i have never met a shia/sunni/maronite /druze that i did not get along with, after i got to know him/her a little and listen to his/her story...

The reality is that they played the sect/religion card to brainwash us and use us. Divide to conquer. And we see the reality of this now: they took everything: money, health, environment, future, dreams... and they took from all of us regardless of our sect/ religion... Maybe it's time we got back at them. Maybe it's time we come together as one people and bring down this corrupt class once and for all... Killoun ya3neh killoun...