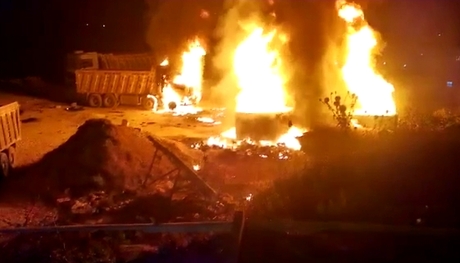 A warehouse where fuel was illegally stored exploded in the Akkar town of Tleil early Sunday, killing 28 people and burning dozens more in the latest tragedy to hit the country which is in the throes of a devastating economic and political crisis.

Tleil is about 4 kilometers from the Syrian border, but it was not immediately clear if the fuel was being prepared to be smuggled to Syria, where prices are much higher compared to those in Lebanon.

A Lebanese military official said the explosion occurred after the army confiscated a warehouse in Tleil where about 60,000 liters of gasoline were stored and the order was given to distribute the fuel to residents of the area. Residents had gathered to acquire the scarce commodity, available only on the black market at exorbitant prices or not at all.

It was not clear what caused the blast, the official told The Associated Press. He spoke on condition of anonymity in line with regulations.

In an official statement, the said said a fuel tank that "had been confiscated by the army to distribute to citizens" exploded just before 2:00 am (2300 GMT). It said soldiers were among the wounded.

The army began raiding gas stations Saturday to curb hoarding by suppliers after the central bank chief announced this week he would scrap fuel subsidies.

A nighttime video circulating online showed residents gathered at the site before the explosion, filling up gallons with fuel. AP footage showed the charged remains of what appears to be part of a tanker that exploded. Lebanese soldiers, a Red Cross vehicle and other trucks could be seen in the area.

The tragedy overwhelmed medical facilities and spurred a search for the missing, heaping new misery on a country already suffering from an economic crisis and severe fuel shortages that have crippled hospitals and caused long power cuts.

"Our teams have transported 20 dead bodies ... from the fuel tanker explosion in #AKKAR to hospitals in the area," the Lebanese Red Cross said on Twitter.

It added that 79 other people were injured.

The official National News Agency said the explosion took place following scuffles between "residents that gathered around the container to fill up gasoline" overnight.

The agency added that the army had left the area before the fight and the explosion.

Marwa al-Sheikh, from Akkar, brought her 23-year-old brother, Ismail, at dawn to a Beirut burns center; one of only two such facilities in the country. He had been turned away from most hospitals in the north that were unable to treat burns to his arm and legs sustained during the explosion.

"At night, we were informed that the army was distributing gasoline... so people flocked to fill it in plastic containers... straight from the tank," Marwa told AFP.

"Most of the people who were there said that someone had thrown a lighter on the floor" causing a fire that quickly led to the explosion, she added.

Social media reports said the container's owner fired shots toward the container during the scuffles, which reportedly caused the blast.

In the morning, angry residents burned vehicles belonging to the man at a site that he owns in the town, NNA said.

Outside the Salam hospital in the northern city of Tripoli, a woman collapsed after she was told her son succumbed to his wounds.

"Oh my God. He has little kids," said the woman as she wept. "Why did you leave me Ahmad?"

A young man standing nearby cried: "We will go to your homes and burn you there," a reference to Lebanon's political leaders, blamed for decades of corruption and mismanagement that has led the country to bankruptcy.

Yassine Metlej, an employee at an Akkar hospital, said that the facility had received at least seven corpses and dozens of burn victims.

"The corpses are so charred that we can't identify them," he told AFP.

"Some have lost their faces, others their arms."

He said the hospital had to turn away most of the wounded because it is unable to treat severe burns.

The head of Lebanon's High Relief Council (HRC), Mohammad Kheir, said authorities were "in contact with Turkey and Egypt to transfer the most serious cases abroad," according to NNA.

"This is a real catastrophe, like the Beirut explosion," he said.

George Kettaneh of the Lebanese Red Cross told local media that first responders received reports of an explosion shortly before 2:00am (2300 GMT).

He warned that the tragedy will pile pressure on the country's only two burns centers, located in the northern city of Tripoli and the capital Beirut.

An employee at another hospital who asked to be identified only as Mohammad said more than 30 wounded people had come to the facility.

"They all have burns," he said, adding that many were turned away because the hospital is not equipped to treat such cases.

Others found care more than 25 kilometers away at the Al-Salam hospital in the northern city of Tripoli, the only facility in the region able to handle burn patients.

An AFP correspondent there saw patients with burned arms and legs.

The overcrowding at Al-Salam prompted many to flock to the Geitawi hospital in Beirut, which also struggled to keep up with the influx of patients suffering from burns.

Hospitals in northern Lebanon were calling for blood donations of all types. Caretaker Health Minister Hamad Hassan instructed hospitals across the country "to receive the wounded from the painful tragedy in Akkar's al-Tlail at the ministry's expense and without reluctance."

Hundreds of Akkar residents flocked to the blast site which was cordoned off by the army early Sunday morning, according to NNA.

Soldiers and rescuers were sweeping the area for missing people and survivors, NNA said.

President Michel Aoun meanwhile called for an investigation into the circumstances that led to the blast.

Lebanon, hit by a financial crisis branded by the World Bank as one of the planet's worst since the 1850s, has been grappling with soaring poverty, a plummeting currency and dire fuel shortages.

The Lebanese army on Saturday said it seized thousands of liters of gasoline and diesel that distributors were stockpiling at stations across the country.

Fuel shortages have left many with just two hours of electricity a day, while several hospitals have recently warned they may have to close due to power outages.

The Akkar explosion comes less than two weeks after Lebanon marked the first anniversary of a blast at the Beirut port last summer that killed more than 200 people.

On August 4, 2020, a haphazardly stored stock of ammonium nitrate fertilizer exploded and left swathes of the capital looking like a war zone.

It was one of history's largest non-nuclear explosions.

In the year since, no officials have been held to account for that blast.

Former prime minister Saad Hariri drew a link between the Akkar and Beirut explosions in a statement shared on Twitter.

"The Akkar massacre is not different from the port massacre," he said.

"If this was a country that respects its people, its officials would resign, from the president to the very last person responsible for this neglect."

Despite the economic crisis, political wrangling has delayed the formation of a new government after the last cabinet resigned in the wake of the port blast.

International donors have pledged hundreds of millions of dollars in humanitarian aid to Lebanon.

But the money is conditional on the formation of a new government prepared to spearhead reforms, and on the resumption of talks with the International Monetary Fund.

So so sad. Just when we think we've hit rock bottom and things couldn't get worse.

"If this was a country that respects its people, its officials would resign, from the president to the very last person responsible for this neglect."… so you can be the first to resign!! abandon politics, that you’re not cut for, found an NGO and start helping Lebanese people! otherwise stop the cheap talking and emigrate to SA

1 min ago MTV: The death toll from the Tleil explosion has risen to 28.

Another tragedy…. And in an unrelated event I lost my uncle this morning.

Lebanons number one enemy is not Israel, but themselves. Thieves, corrupted peopla at all levels, fundamentalists, terrorists (and yes, Hezbollah is among those).

un520 don’t lose your time with the disciple of Ghaddafi, everybody knows how miserably his ideology has failed… btw, BL, if it was the democracy dream-land, why didn’t you go to Libya instead of Britain..?