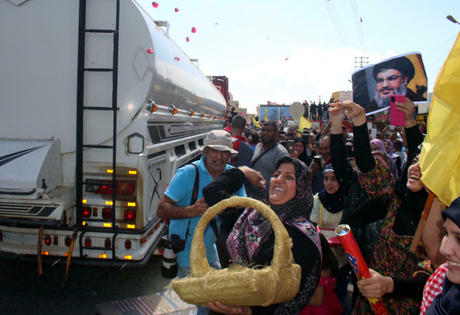 Iranian fuel has entered Lebanon without state authorization and despite U.S. sanctions following arrangements by Hizbullah, consecrating the party's status as the main powerhouse in the crisis-hit country.

"This latest event gives yet another confirmation that Hizbullah has considerably increased its sway over the Lebanese state," said political scientist Karim Emile Bitar.

"It is no longer even trying to hide behind the veneer of legality offered by official institutions," he said.

Lebanon, grappling with its worst-ever financial crisis, defaulted on its debt last year and can no longer afford to import key goods, including petrol for vehicles and diesel for generators during almost round-the-clock power cuts.

Fuel shortages have forced motorists to queue for hours -- sometimes days -- while electricity outages have plunged the country into darkness, paralyzing hospitals, schools and government offices.

Despite being an integral part of the state -- it holds seats in parliament and backs several cabinet ministers -- Hizbullah has bemoaned the state's failure and vowed to step in with its own solution.

The party, which is designated by the U.S. as a "terrorist" group and is the only group to have kept its arsenal after Lebanon's 1975-1990 war, arranged for dozens of trucks carrying Iranian fuel to enter Lebanon via Syria last week.

The delivery was not officially approved by the government and the trucks entered via an illegal crossing for a transaction that violates U.S. and other sanctions.

The move, although a first, falls in line with the Iran-backed party's long-standing autonomy from a weak centralized state that has stood idly on the sidelines as the group deployed in Syria in 2013 and repeatedly engaged in military confrontations with Israel on Lebanon's southern front.

"It's very clear that the state is unable to stop Hizbullah. The state is watching and it's paralyzed and it can't take any action."

Three more Iranian ships are expected to deliver fuel oil and petrol in the coming weeks, according to Hizbullah chief Sayyed Hassan Nasrallah.

The shipments were purchased by Lebanese businessmen, according to Iran, most likely with ties to Hizbullah.

The Lebanese government, headed by prime minister Najib Miqati and which was finally formed last week after a year-long delay, has distanced itself from the scheme.

Speaking to CNN last week, Miqati described the Hizbullah delivery as "a violation of Lebanese sovereignty" but said he believed Lebanon would not be hit by U.S. sanctions because the government had not authorized the shipment.

The first fuel delivery -- which Hizbullah's al-Manar TV says can only cover the needs of a single major institution such as a hospital for one month -- is a "test," Haytayan said.

If it goes unanswered by the U.S., then many traders may be emboldened to stock up despite the threat of sanctions, especially if shortages persist, the expert said.

Fuel distribution will be managed by Hizbullah auxiliaries that are already sanctioned and run no additional risk.

Al-Amana, a fuel distribution company which is owned by Hizbullah and has been under U.S. sanctions since February 2020, distributed a first batch of around 100,000 liters of fuel oil in the southern Hizbullah stronghold of Tyre and Beirut on Saturday, al-Manar reported, without specifying the exact beneficiaries.

On Sunday, Al-Amana distributed another 100,000 liters of fuel oil in Mount Lebanon and the eastern Bekaa Valley which is widely considered a Hizbullah bastion, al-Manar said.

The rest will be sold on the market in Lebanese pounds at a price less than the subsidized rate set by the state, Al-Amana said Sunday, making it a serious competitor for official importers selling stocks in U.S. dollars at a much higher price.

But he stressed individual institutions could also source fuel directly from Hizbullah if a particular municipality refuses to engage with it for political reasons.

Dispelling rumors that the fuel will only benefit Hizbullah's own community, Nasrallah said it was intended "for all regions and for all Lebanese" regardless of their political or sectarian affiliation.

sure… but after filling up Hzb leaders and barons Range Rovers tanks, generators providing power to their villas lightning, air conditioning and heating systems, ventilation systems for their underground bunkers, I don’t know how much fuel will be left for distribution to Lebanese population

what a beautiful story. Bravo guys. Hezbollah is donating fuel to the needy, what is wrong with that? Sanctioned or not, Lebanese need fuel and we will find away to get it, either through government channels or other channels. I am a Lebanese, and proud of these guys for doing this. If you dont like it, dont ask them for fuel or dont buy from them, but the facts are winter is coming and we need it badly, i dont see anyone else lining up to donate fuel to us.

Guest... do you know the meaning of the word "propaganda"?
Do you know how much of this fuel will covers our needs? 0,7%
Do you know who it will go to?
Don't you find all this advertising ridiculous disproportionate and propagandist?
Why in your opinion did they ship it to Syria first?
Pff... light weight brain...

"The delivery was not officially approved by the government and the trucks entered via an illegal crossing for a transaction that violates U.S. and other sanctions."

Lebanon is officially under Western sanctions, when they refuse to let much needed fuel into Lebanon.

Good thing we can always turn to the Eastern Sphere, and let go of our old Western ties.

did you already get your ration Mystic? be patient, it’s going to take some time to go down the ladder from your chiefs’ Range Rovers to you sentinels with mopeds….

The Lebanese State already accepted the fuel into state run hospitals, so what is your problem?

What a lovely pièce of propaganda... after smuggling mazout out and making profits hezbos sell iranian oil spitting once again on the sovereignty of Lebanon... the number one mafia in the World! The pyroman coming back as a firefighter!