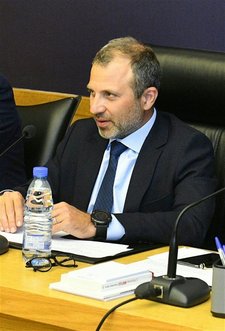 “We will give confidence because the line-up came according to the norms. The prime minister respected constitutional partnership with the President and balance in portfolios and sectarian distribution, albeit with some flaws,” Bassil said during a parliamentary session to debate the government’s policy statement.

“Confidence will be linked to five main issues: the money of depositors, social safety, financial reform, the port’s blast and parliamentary elections, in addition to other issues,” Bassil added, noting that his bloc might later withdraw confidence from the government depending on its “course.”

Moreover, Bassil demanded a forensic audit at the Ministry of Energy and the rest of ministries and institutions since 1990, in order to reveal the truth about the waste of public funds in the electricity sector.

“We were prevented from slashing the cost on the state according to the 2010 plan,” Bassil said.

Turning to the issue of the 2020 Beirut port blast explosion, the FPM said the matter has become “an issue of truth and justice,” lamenting that “there is an attempt to conceal them.”

“Regardless of the investigative judge and his performance, we have people (port officials) who were affiliated with us and they did their job and were not negligent. They even sent and wrote warnings, but when they were summoned for interrogation, they turned themselves in and they have been imprisoned for over a year. We consider this injustice but we did not cover up for them to allow them to flee,” Bassil added.

The FPM chief also lashed out at the Lebanese Forces, without naming it, and at fugitive pro-LF businessman Ibrahim al-Sakr.

“Ibrahim al-Sakr stored fuel and (ammonium) nitrates that were more dangerous than the port explosion and he hides behind the Virgin Mary and St. Charbel to accuse the FPM of depriving people of fuel. He then flees and his MPs insolently attack us to cover up for their crime,” Bassil added.

Every spit that come out of his mouth is a mix of lies and poison.

Jebran?
I guess it is you who voted me down.