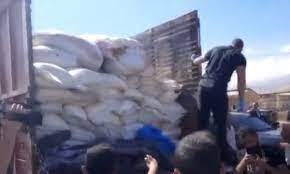 The owner of the Bekaa ammonium nitrate truck, Saadallah al-Solh, admitted, after being arrested on Tuesday by the army in Faraya, that he had bought the nitrates from Maroun al-Sakr, the brother of fugitive pro-Lebanese Forces businessman Ibrahim al-Sakr, media reports said on Thursday.

“This was not the first purchase,” al-Akhbar newspaper quoted Solh as telling interrogators. Solh added that Sakr has been selling nitrates to quarries and stone crushing plants.

He added that Sakr was smuggling the nitrates to Lebanon “inside containers shipping agricultural fertilizers.”

Two hypotheses had been previously proposed concerning the source of the nitrates -- either they were smuggled from Syria or they were stolen from the port of Beirut, al-Akhbar newspaper said.

The newspaper added that chemical experts have analyzed the nitrates and concluded that the purity and density of the seized nitrates were completely different from those in the exploded Warehouse 12 at the Port of Beirut.

The experts also mentioned that the nitrates seized in Baalbek are “recent compared to the nitrates that were at the port.”

God bless al-Akhbar, the voice of truth, for exonerating our Shia resistance from the port explosion crime. It s now obvious the Lebanese Forces in conjunction with the Saudi-American-Israeli-Sudani-Somali-Bengali-Bahraini-Emirati coalition are behind the August 4th port explosion.

Our Shia resistance continues to work silently to improve our standard of living and rebuild Lebanon's strained relations and image with the International community.