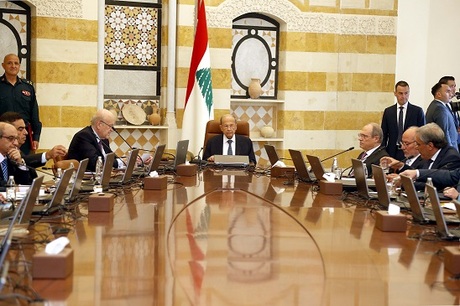 A Cabinet session scheduled for Wednesday was postponed following consultations and an agreement between President Michel Aoun and Prime Minister Najib Miqati, the Presidency said, as efforts continued to resolve a political standoff over the work of Beirut port blast investigator Judge Tarek Bitar.

LBCI television said the session was postponed in order to reach “an agreement on a legal formula regarding the investigative judge.”

Al-Jadeed TV said the session was postponed after “the failure to reach an exit for the Cabinet rift between the Shiite duo, Marada and the President,” noting that “contacts were kept ongoing in order to reach an understanding.”

Sources close to Aoun and Miqati meanwhile told al-Jadeed that “a solution paper is being devised.”

The TV network added that Miqati is “working on resolving the dispute between the Shiite duo and the President.”

“The Justice Minister has worked on a formula that takes into consideration all the reservations over the judicial investigation through the judicial authority and not through the executive authority,” al-Jadeed said.

The TV network also noted that Aoun had left Tuesday’s session angry, saying that “no party can threaten to resort to street action.” That session was adjourned by Aoun to Wednesday after the eruption of a heated debate.

There is no question any longer that Hizbullah and their allies from Amal & Marada have direct responsibility in the Beirut Port explosion, otherwise if they have nothing to hide, why are they unlawfully resisting being summoned by the judge ?

Consultation for what? I tell what they are doing,each camp goes back to its Zaim to take instructions to vote Bitar out or not. Most will.

The time of Huzbullah is nearing its finality. Huzbullah would no more exist in its present form. I am also sure that if the Shai of Lebanon are free to choose their leaders, Huzbullah would be their last chose. The Shai are choosing Huzbullah because they are scared of it.