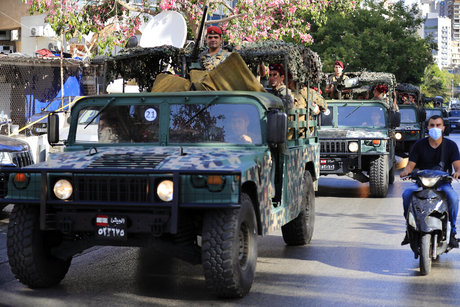 A Lebanese court Thursday threw out a request to remove the judge investigating last year's monster port blast as the country braced for escalating tensions over his future.

Judge Tarek Bitar, a target of a political campaign led by the Shiite movements Hizbullah and Amal, was forced to suspend his probe for a second time in less than a month on Tuesday over lawsuits filed by former ministers he had summoned on suspicion of criminal negligence.

The suspension coincided with deep divisions within the government over whether to replace the controversial investigator, who is seen as a last hope for justice by many Lebanese but is condemned as biased and corrupt by political leaders.

On Thursday, the Court of Cassation turned down a lawsuit filed by two ex-ministers demanding a replacement, a court official told AFP on the condition of anonymity.

"Bitar does not fall under the court's jurisdiction so it does not have the authority to consider requests for his dismissal," the official said.

It is the second time this month that the judiciary has ruled in favor of Bitar, who is hailed by human rights groups and relatives of blast victims as a symbol of judicial independence in a country where political impunity has long been the norm.

The ruling, which goes into effect immediately, would allow Bitar to resume enquiries into the August 4 explosion which killed more than 200 people and destroyed large swathes of the capital.

But the investigator's fate is all but clear as Hizbullah and Amal press ahead with a campaign aimed at removing him.

Supporters of the two Shiite movements gathered outside the Judicial Palace in Beirut amid a heavy troop deployment on Thursday to demand Bitar's replacement.

The protest followed a speech on Monday by Hizbullah chief Sayyed Hassan Nasrallah who called for an "honest" judge to replace Bitar.

Ali Hasan Khalil, a senior Amal movement lawmaker, threatened a "political escalation" if the course of the investigation "was not rectified" after Bitar on Tuesday issued an arrest warrant against him for failing to show up for questioning.

Tensions spilled into cabinet with a meeting on Tuesday ending in a row as ministers affiliated with Hizbullah and Amal pressed the government to support their demand to replace Bitar.

A follow-up session scheduled for Wednesday was postponed, signaling no agreement has been reached between factions in the cabinet, with some ministers arguing the government should not intervene in judicial matters.