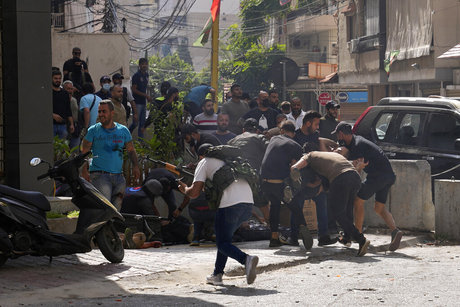 Amal Movement and Hizbullah accused "armed and organized groups" of assaulting their supporters in Tayyouneh, in a joint statement Thursday.

They said that “peaceful protesters heading to the Justice Palace to denounce politicization of the port investigation were exposed to direct fire by snipers from the roof of a building at 10:45 am, followed by intense shooting.”

“The shooting was aimed at the heads,” the statement said, “resulting in the falling of martyrs and serious injuries.”

“This attack by armed and organized groups aims to drag the country into a premeditated strife,” the statement said.

Amal and Hizbullah held “the instigators” responsible, describing them as “parties hiding behind the blood of the victims and martyrs of the port in order to achieve malicious political gains.”

The two parties called on the Lebanese Army to “assume responsibility and intervene quickly to stop these criminals.”

They also called on all supporters and partisans to remain calm and not to get dragged into malicious civil strife.

How Sad..... These civilized Black T-Shirts were peacefully demonstrating against the bias of Judge Bitar and all they get are bullets to the head!

Ice-man, can you smell it too? There’s an indescribable stench here, the closest thing I could compare it to is sewage. And as we know, sewers are full of…. iit!

The Shia terrorists headed to Beirut on heavily armed pickup trucks to “send a message”. It looks like some people heard them loud and clear and were ready for them. From the videos we got to see, the civil war never ended, all protagonists put it on hold whilst they were robbing our bank savings and putting the country in un repayable debt, now that the money is gone they’re resuming their conflicts.

God bless our Shia resistance for exercising its constitutional right to peacefully demonstrate against the tyranny and injustice of Judge Bitar. The shooting and killing of our demonstrators coincided with the visit of the American Under Secretary of State to Lebanon and is part of the Saudi-American-Israeli-Somali-Morocani-LebaneseForsani-Sengali-Libyani-Bahraini-Emirati coalition scheme to cause strife.

These acts will not go unpunished and the perpetrators will receive severe punishment.

.... I am sure the brave Lebanese Army managed to arrest all of them for illegal possession of arms and carrying out terror acts.

Kill all Kisb and Amal terrorists!! Hope they all die. They are the CANCER of Lebanon!!

Their plan has always been to replace the Christian population of Lebanon just like they’re replacing the Syrians in Syria. France, the EU and Biden are supporting Iran… so we’re zucked.

Why are peacful protesters carrying AK47s?

Is this guy for real?

Oh he is "for real", alright ... His and their designs on Lebanon are entirely serious .. however, they just don't include you or your kind being a part of their and Lebanon's future .. "feet, wheelchair or box .. you are free to pick your method of departure" is his message of reality to you.

So, Hassan Khalil's son travels on a private jet?! lol

Why not? His father amassed a fortune when he was Finance minister. He would not approve any payment unless he got 10% of its value.

Disgusting criminal hezb and allies walking with weapons to hide their implication in the port explosion. May they all go to hell where they belong or at least to Iran to their masters.

I would like to praise those that stood firm against those outlaw thugs wearing black. Just like I praised Arab Khalde and the Druzes that caught Iranians when launching rockets. These Iranians brings only damage and decline. No pragmatism whatsoever. Say firm my fellow countrymen, we will be victorious and once again Lebanon can flourish. But don't ever be naive, they and brutality goes hand in hand, just look at the death toll in Syria, staggering 800.000 killed.

Splendid specimen in logic objection, what they do is to expose themselves - poor unbred! Premisses are completely of tangent, conclusion is startling. Be aware of them herds of evil who prefer living in filth and verdant societies. Wonder of god that he placed them between Lebanese. Just imagine the unimagined, christians walking en masse in other neighborhoods chanting shita, shita, shita aloud - intimidating people with their guns? God just get rid of them!