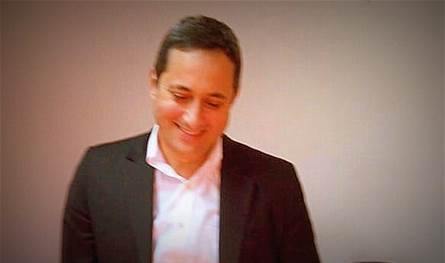 Tarek Bitar, the young and discreet judge investigating last year's devastating Beirut port explosion, is arguably the most exposed man in the country.

By daring to take on some of Lebanon's untouchable political barons, he has landed himself at the center of a battle of wills that is bringing the country to the brink once again.

To some of those seeking truth and justice after the deadly port blast, the 47-year-old is a white knight fighting a desperate and lonely battle against a corrupt and criminal elite.

For part of the establishment and its supporters, Bitar is politically biased and the biggest threat to the status quo since a wave of protests against the ruling class in 2019.

For the relatives of the 215 people who were killed when a huge consignment of haphazardly stored fertilizer exploded on August 4 last year, Bitar is the only hope.

"He is conscientious and bold at the same time. These are essential qualities for a judge," says Yousef Lahoud, one of the lawyers representing the victims' families.

His determination will be tested more than ever after a demonstration for his removal Thursday by supporters of Amal and Hizbullah degenerated into deadly violence and scenes reminiscent of the 1975-1990 civil war.

The man handling the biggest case since former prime minister Rafik Hariri's 2005 assassination is a little known figure who never talks to the press or even appears in public.

The virulent hate campaign launched against him in recent days only has a couple of pictures of him available for social media trolls to share on social media or party muscle to torch in street protests.

Bitar has rocked the boat by summoning top politicians from a range of political parties for questioning, and even going as far as issuing an arrest warrant when one failed to show up.

Former finance minister and senior lawmaker from the Amal Movement, Ali Hassan Khalil, lashed out after the arrest warrant against him, threatening a "political escalation" if the course of the investigation "was not rectified."

The group's ally, Hizbullah, is also a prominent critic calling for his dismissal.

Hizbullah has accused Bitar of political bias and Washington of "interference" in the investigation.

The two groups' supporters, at an anti-Bitar protest that escalated into deadly clashes Thursday, burned images of U.S. ambassador Dorothy Shea, alongside Bitar's.

But the judge's supporters say he is independent and has managed to position himself outside a political system of patronage under which parties bank on sectarian allegiance to get their way.

"He has no known political affiliation," said a person close to him who agreed to speak on the condition of anonymity.

"That's why politicians have a problem with Bitar -- they have no means to pressure him."

The politicians he is pursuing accuse him of being outspoken about the fact that the time has come to change the political class.

Throughout his career, the judge from the north of Lebanon has managed to forge himself a reputation as an "upright and incorruptible" member of the judiciary, even to his detractors.

- No receptions, no favors -

Confident, some say to the point of arrogance, he keeps to himself.

"When he was named to lead the investigation, people struggled to find a picture of him," the person close to the judge said.

A stern character who is dedicated to his mission, he is rarely seen smiling.

He declines invitations to dinner, receptions and all other social occasions for fear of being perceived as being swayed one way or the other.

"He doesn't even accept phone calls from people who want to ask him for a favor," they said.

Even some of his colleagues eye this "strange phenomenon" of a judge with suspicion, and claim a more experienced one should have been appointed for such a sensitive probe.

"People are disturbed by his audacity. He's something no one has seen before at the Palace of Justice," the same source said.

He lives in a modest apartment in the north of Beirut with his wife, a pharmacist, and their two children, who are now guarded by soldiers.

After graduating with a degree in law from the Lebanese University, he started his career in north Lebanon, where he established himself as an independent magistrate, before going on to head the Beirut Criminal Court.

Among the cases he oversaw there was the controversial case of Ella Tannous, a little girl who had to have all her limbs amputated due to medical malpractice.

Last year, he condemned two private Beirut hospitals and two doctors to pay a huge fine to her family, a decision that outraged medical staff and triggered a strike.

Unless Michel Aoun is America’s man, then no, Bitar is Aoun’s man.

We wish this courageous judge success in unveiling and catching all the criminals from Hizbullah and their allies, who are responsible for the Beirut Port blast. God be with you Mr Bitar.

Kizb always bragged that they knew everything going in and out of the country. Now, when something literally blows up in their faces, they start denying all knowledge about it. Same old story with them--DENY and INSIST.

Finally a man of honor!!! We definitely need to fill our government seats of ministers, deputies and president, with people like judge Bitar.

God bless you bitar. All of us voting for president bitar 2022