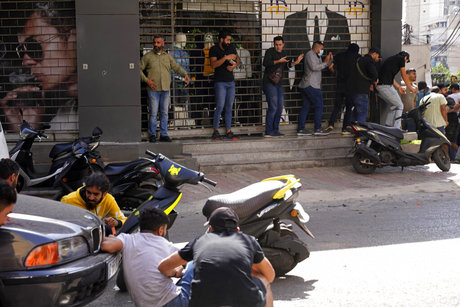 Hizbullah and Amal on Thursday openly accused the Lebanese Forces of launching an “armed attack” on their supporters in the Tayyouneh area, which had during the day witnessed hours-long armed clashes reminiscent of the beginning of the 1975-1990 civil war.

In a joint statement, the two parties said “groups from the Lebanese Forces party deployed in the adjacent neighborhoods and on rooftops from where they practiced direct sniping operations aimed at intentional killing, leaving this number of martyrs and wounded.”

At least six people were killed and 32 others injured in the violence.

Condemning what they called “a criminal and premeditated act targeted at stability and civil peace,” Hizbullah and Amal called on the army and security forces to “shoulder their responsibilities in returning things to normal and arresting those behind the killing operations who are known by their names, as well as the instigators who oversaw this deliberate operation from black rooms.”

“They must be put on trial and must receive the harshest penalties,” the two groups said.

They also pledged to the families of their slain supporters that they would “follow up on their cause until justice is fulfilled.”

The LF meanwhile denied the accusations, calling on authorities to “specify the responsibilities in a clear and frank manner.”

“We strongly condemn the regrettable incidents that happened today on the ground, which are a practical result of the polarization that (Hizbullah chief) Sayyed Hassan Nasrallah started four months ago by inciting, in all his speeches, against the investigative judge,” the LF added.

“All media outlets and the videos circulated on social media confirm the armed appearances with RPGs and machineguns and the entry into civilian neighborhoods,” the party went on to say, in an accusation against the supporters of Hizbullah and Amal.

It added that the allegations against the LF are aimed at “deviating attention from Hizbullah’s invasion of this area and, in previous instances, of other areas.”

“What happened today is known to everyone, which is confronting justice through the same coup-like approach, and the use of arms, intimidation, violence and force to derail justice in the case of the Beirut port explosion,” the LF added.

In another statement, it called on the army to issue a detailed statement to “clarify the circumstances of what happened, from the very first moment, so that some, especially Hizbullah, do not continue to exploit these tragic incidents to launch accusations in every direction in order to exit the dilemma they have put themselves in.”

Why idiots ? At the end some1 has to stop hizbullah.By wanting to shutdown the contry to impose on us to remove bitar (like he did to impose Aoun), he went a step too far. Christians cannot live in a state ruled by al sayyed al fakih. Either they flee the country and that would be for most the first options, or they fight to be able to live in the country. And those who cannot leave the country dont have but this option. Living under wilayat al fakih is not an option. Good for you coz u already have the first option.

It is not a battle between Christians and Muslims, it is between the parties. I know Christians in SSNP whom would happily put Geageas head on a spike for his pro Israeli sentiment.

HizbIran’s protest to remove Bitar and accusing Lebanese Forces of attacking its “peaceful” demonstrators will result in certifying Hizbollah’s guilt in port explosion (as Hariri’s assassination), insure massive shift in support to LF, and leave Aoun and Bassil as the Useful Idiots with no cloth on. Beri’s role is a disgrace to the legacy of Imam Musa Sadr, one of Lebanon’s giants who believed in building up his community instead of destroying others to control them. History will identify Beri as the butcher of Tehran during the 2010 Iran Green Revolution when he sided with the Basij instead of freedom and democracy, and the butcher of Lebanon’s by complicity with criminal Hizbollah in destroying Lebanon’s institutions, economy, independence and dignity. Beri took Shia to hell before Aoun took Christians and Lebanon to hell

they did give you a nice whipping yesterday:)

But when you Shias kill women and children in Syria, it is of course an act of bravery and experience in urban warfare:)

it is regretable she was caught in the gun fire, may God Bless her soul. but how do you know she was sniped at? and not a stray bullit from friendly fire? did you see how the militia suggs were shooting right left and centre with no aim what so ever?

Hey Mystic why were the peaceful protesters in black T-Shirts and carrying AK47s? Also if they have nothing to be afraid of let Bitar run his course and deal with the outcome via legal challenges.When Hizballah believed Israel was the cause of the explosion they were ready to go to war to get justice but when things are looking like Hizballah is the root cause they are ready to go to war to deflect the blame.A question will any Lebanese other than Amal and Hizballag be allowed to protest in Dahieh?

lol the terrorists were literally fighting ghosts, they were losing it!

That should read not "think" but "know"

hey Israeli stooge stay out politics and stay in your kibbutz quietly...,