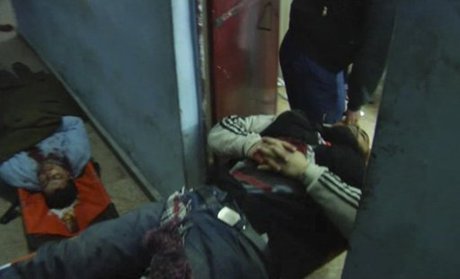 Syrian forces killed 57 civilians Tuesday as they blitzed the city of Homs and a village in Idlib province, monitors said, as the Red Cross sought a truce to deliver aid and the United Nations demanded unimpeded access for aid groups.

The escalation comes as Russia, a key ally of President Bashar al-Assad's regime, said it will boycott an international conference in Tunis this week aimed at seeking political change in Syria and China refused to commit.

It also comes ahead of the weekend referendum on a new constitution that could end nearly five decades of rule by Assad's Baath party.

At least 33 civilians were killed in an operation by Syrian forces in the village of Abdita in the northwestern province of Idlib that extended to the neighboring villages of Ibleen and Balshon, the Syrian Observatory for Human Rights said

And despite a plea by activists on Monday to allow women and children to flee Homs' besieged Baba Amr neighborhood, troop reinforcements were sent to the outskirts of the restive city, which residents say has been under assault for 18 straight days.

Activists fear they are preparing to storm its defiant neighborhoods.

In a statement, the opposition Syrian National Council urged the "Arab League and the Security Council to adopt procedural measures to end the barbaric attack on Homs, and to take necessary action to protect civilians, provide aid and treat the wounded."

The umbrella group of a number of Syrian opposition parties urged international organizations to "act speedily to end the siege of Homs," warning that regime forces had bolstered troops around the flashpoint city.

The council called on residents of "all Syrian cities to rise up against the regime in order to release some of the pressure put on our people in Homs."

Eight more civilians, including a child, were reportedly killed by gunfire elsewhere in the country.

Homs-based activist Hadi Abdullah of the General Commission of the Syrian Revolution, who had earlier voiced fears of an imminent ground attack against Baba Amr area, told Agence France Presse "large reinforcements were heading to Homs."

"We counted at least 150 shells crashing in Baba Amr within two hours this morning. We gave up counting afterwards," he said.

Omar Shaker, another activist, told AFP the neighborhood had "no electricity, nor fuel," and that "snipers have hit water tanks," rendering the situation "bad beyond imagination."

Human Rights Watch said it had confirmed the use of Russian-made 240 mm mortars in Homs.

"It is by far the most powerful mortar in modern use -- most other countries stop at 160mm mortars, and a very powerful weapon," HRW emergency director Peter Bouckaert told AFP.

"We have little doubt that those extremely powerful mortars are being fired by the regime forces into civilian neighborhoods of Homs. We are talking about a 250-pound mortar round that can only be fired from a heavy specialized armored vehicle and it requires a nine person crew to operate," he added.

In the capital, the Observatory reported that security forces opened fire overnight to disperse a demonstration in the al-Hajar al-Aswad neighborhood, as daring protests spread in the stronghold of Assad's regime.

Protesters blocked the roads leading to Baramkeh Square in the center of the capital overnight, according to Mohammed Shami, a spokesman for activists in Damascus province.

Demonstrators used "burning materials" to shut the roads, triggering a security alert that saw "heavily armed forces" deployed in the area within minutes, he added.

Security forces also opened fire to disperse a student protest inside the University of Aleppo, the northern city that until recently been spared anti-regime demonstrations.

And secular groups demonstrated outside parliament against an article in the draft constitution that would require the president to be a Muslim.

The International Committee of the Red Cross called for a daily truce of two hours in Syria so it can deliver vital aid to afflicted areas, after saying a day earlier it was in talks with both sides to halt the violence.

The head of the rebel Free Syrian Army, Colonel Riyadh al-Asaad welcomed the call, but voiced doubts that the "criminal" regime would commit.

Meanwhile, the U.N. under secretary-general for humanitarian affairs, Valerie Amos, called on Syria to allow aid groups unimpeded access to the country.

"This is a major human rights crisis that is now moving into significant humanitarian consequences," Amos said after talks with EU aid commissioner Kristalina Georgieva.

And although top U.S. military officer, General Martin Dempsey, said over the weekend it was "premature" to arm the country's opposition, top Republican Senator John McCain called again for the outgunned rebels to be supplied with weapons.

A Friends of Syria meeting in Tunis on Friday will "demonstrate that Assad's regime is increasingly isolated and that the brave Syrian people need our support and solidarity," she said on a visit to Mexico.

The meeting "will send a clear message to Russia, China and others who are still unsure about how to handle the increasing violence but are up until now, unfortunately, making the wrong choices," she added.

Russia announced that it will not take part in the meeting because it was being convened "for the purpose of supporting one side against another in an internal conflict," the foreign ministry said.

and the sad part is that a while back, the killing regime of bachar used part of a poem from nizar qabani. rip nizar, i am glad you are not alive to see your syria bleeding.

weino demented general and frangieh and wahab? they said that 50 tuesdays ago the syrian crisis is resolved and nothing is going on.

with their beards the look like the terrorists of nahr el bared ,
Barbers needed all over Syria

Allah Hu Alkbar... May Allah Bless the victims and protect them from the Murderers of Assad/Baath/HizbSlah Hypocrites.