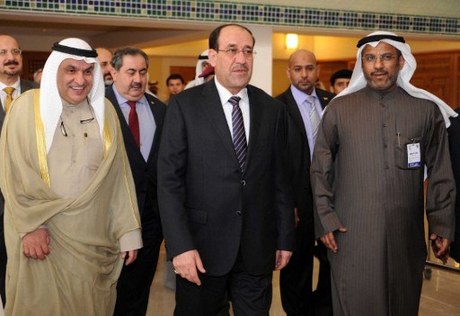 Kuwait agreed a $500 million deal with Baghdad during a visit by Iraqi Premier Nouri al-Maliki on Wednesday, ending a decades-long debt dispute that saw an Iraqi Airways flight impounded in London.

The agreement comes amid a two-day trip by Maliki and several of his senior ministers ahead of an Arab League summit in Baghdad at the end of the month, the first to be held in the Iraqi capital since now-executed dictator Saddam Hussein's 1990 invasion of Kuwait.

"Part of it will be paid in cash, and the rest will be used to establish a joint airline company."

He did not give details on how much of the payment would be handed over in cash.

According to Kuwait Airways, Iraq's flag carrier owes it $1.2 billion as a result of the 1990 invasion. Kuwait says 10 of its planes as well as aircraft parts were plundered after its airport was seized during the invasion.

The dispute saw British authorities seize the passport of Iraqi Airways chief executive Kifah Hassan Jabbar and impound the plane which he flew to London in April 2010.

Earlier, Maliki told reporters in Kuwait that the two countries "fully intend to find definitive solutions to problems, disputes and barriers (in bilateral relations) inherited from the old regime" of Saddam Hussein.

Speaking after meeting with Kuwaiti parliament speaker Ahmad al-Saadoun, Maliki said: "We have found a positive tone and direction, and a genuine desire (from Kuwaiti officials) to close all these files."

Maliki was received on arrival to Kuwait by Emir Sheikh Sabah al-Ahmad Al-Sabah.

Mussawi told AFP on Tuesday that among the topics to be broached are Iraq's payments of five percent of is oil and gas revenue as war reparations to Kuwait.

Along with the reparations, the two sides have a bevy of outstanding issues that remain unresolved.

Among them is the Mubarak al-Kabir port project, which was begun by Kuwait in 2007, which Baghdad claims would strangle its shipping lanes.

U.N. envoys are also looking for greater progress in helping pin down the fate of Kuwaitis and other foreigners missing since the 1990 war. Property and most of the Kuwaiti national archives also remain missing.

And there are still outstanding border issues between the two countries.