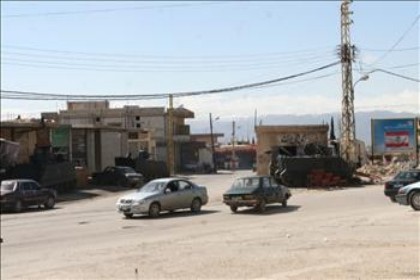 Unknown individuals on Monday kidnapped the pastor of Baalbek’s Our Lady of Good Help Church, Father Walid Gharious, aka Father Elias Maroun Gharious, on the Baalbek road near the intersection leading to the town of al-Ansar, state-run National News Agency reported.

The priest was driving his Toyota Avanza when the abductors who were in two silver- and black-colored Grand Cherokee SUVs intercepted him, NNA said.

The abductors whisked Gharious away to an unknown destination and left his car behind, the agency added.

“Security forces are pursuing the kidnappers after unveiling threads related to the kidnap operation,” said NNA.

Citing preliminary information, the agency said the priest was kidnapped for “baptizing a Muslim girl who had fled her family home.”

Later on Monday, NNA reported that the priest was released, without elaborating.

For its part, LBC television said Gharious was handed over to Hizbullah official Sheikh Mohammed Yazbek following his release.

Meanwhile, Archbishop of Baalbek-Deir al-Ahmar Semaan Atallah issued a statement confirming that the priest had been kidnapped, noting that he and Gharious were not aware of the girl’s whereabouts.

“The girl had said she was physically and psychologically tortured by her father for converting to Christianity three years ago, although she is a 24-year-old adult,” said Atallah in his statement.

“I have received an unconfirmed report that she had recently fled to an unknown destination after her father forced her to marry someone,” the archbishop added.

“Last Wednesday, unknown assailants fired gunshots at the house of a priest from the Kairouz family in the town of Nabha, and the a similar incident occurred on Sunday before the start of the municipal elections when shots were fired at the Our Lady Church in Nabha, and we have conducted intensive contacts with the relevant parties in the area in order to settle the situations,” Atallah said in the statement.

If it is the other way around it is supposedly OK. But when someone sees the true light they resort to the violence allowed in their book.

As a christian you are the last to talk about other peoples religions and books. Besides, many christian girls were murdered by their male relatives bcuz they wanted to convert to islam. Should we blame the bible for that? Bcuz there are plenty of passages there that have extreme terror in them. And what is true light according to you? To worshup a prophet and his mother even though they only told people to worship god alone? Is paganism true light? You dont know what true light is son. True light is to worship none but god and to submit to him and believe in all of his prophets. Islam is the true light, not jesus worshiping.

we have conducted intensive contacts with the relevant parties in the area in order to settle the situations,” Atallah said in the statement.

Throw her father in jail for 24hrs for motive on her life, then you can discover where the Priest is located and who paid the filthy shabiha. and when you find out, make them all disappear for a LONG time to teach them a lesson.

What a shame this militia is to the Lebanese..

No Karim ... we are refrring to you and your thugs ... the gangs of welayat al faqeeh ...Go back to Iran

freedom of religion the iran and saudi way....

all human beings are free to chose their way of life.
our lebanese law gives the right for any person to convert to any religion which meets his inner thoughts .
the girl has chosen christianity to guide her life
nobody should be allowed impose on others what kind of life he or she may chose.
we welcome the release of father gharious.
freedom of choice and freedom of religion as well as freedom of speech are all sacred and persons who violate these rights must be punished.

These are just the bitter wages of Islam. Its been this way for 1400 years.