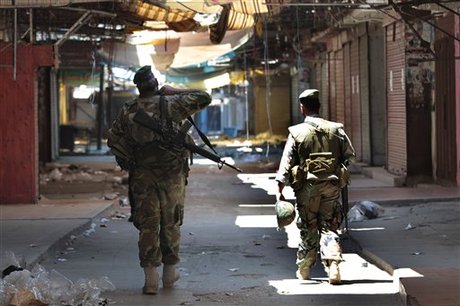 One person was killed and two others were wounded on Friday as exchange of gunfire renewed between the rival Tripoli neighborhoods of Jabal Mohsen and Bab al-Tabbaneh, in the latest such violation of a fragile ceasefire.

“Cautious calm engulfed the area after army units fired heavily for around 10 minutes at the sources of gunfire, silencing the sniper fire,” state-run National News Agency reported later on Friday.

A man was killed while his wife was critically wounded as sniper fire targeted Jabal Mohsen, Radio Voice of Lebanon (93.3) reported. It identified the man as Abu Ahmed Eid and the wife as Hoson Mohammed Dirgham.

NNA said a hand grenade was hurled at the Baal al-Darawish area which is located between the two rival neighborhoods as an Energa-type rocket hit the al-Mallouleh area in Bab al-Tabbaneh.

Radio Voice of Lebanon (93.3) said residents in Jabal Mohsen blocked a road to protest the death of the man. It also said two cars were torched as the identity and fate of their drivers remained unknown.

Clashes between the pro- and anti-Syrian regime neighborhoods last week left 14 people dead and 48 wounded, sparking fears of a spillover of the conflict in neighboring Syria.

Sectarian violence has flared several times in Tripoli since the revolt broke out in Syria in March of last year, including street battles in May that left 10 dead.

Army restores calm.... strange title. As if this is a clash between two countries. Civilians means no weapons. Stop the securing stability B.S, remove arms clean the neighborhood house by house and arrest anyone that resists. Then move on and do the same in every other town/city in Lebanon.

I like your ideas, helicopter, but don't be so naive.

"clean the neighborhood house by house and arrest anyone that resists."

Do you think this is a some movie?

Lebanon free weapons...only the Lebanese military has that right and No one else.

It's all Hezbollah's fault... they set the example... obviously the wrong one. Moreover, they and their Syrian counterparts arm some nasty people from Jabal Mohsen. Hopeless country.

Not hopeless. When you give up you are selling all the blood of the good people fighting for this country being civilized again.

The good people are more than the bad. But the bad people are the most visible ones at the moment.

Hopefully, this will soon be changed.

You hit the nail head on B.

Correct B, Both Hizbollah and the Palestinian camps need to be disarmed and cleansed or be set as an example of disarmament. Otherwise why Did we enter Al Badawi and hundreds of soldiers were sacrificed to clean up the dirt.

The army is not effective in stopping the fighting because it is not backed by a sovereign government that controls its own decisions.
The situation in tripoli is designed to remain explosive at the convenience of the Syrian regime and its lebanese allies.