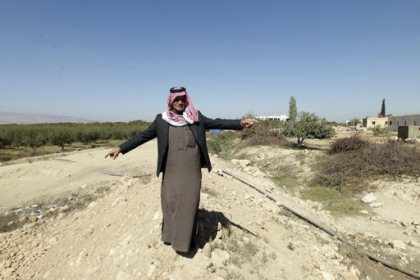 A Syrian force infiltrated on Sunday into Lebanon’s eastern border region of Masharii al-Qaa and opened sporadic fire among the residents of the area.

Security sources told MTV channel that the Syrian force is formed of 30 troops and infiltrated 500 meters into Lebanese territories.

According to the sources, the Syrian troops raided several houses in the area.

An informed source told LBCI that the Syrian army established a military post in the house of a Lebanese citizen in al-Joura town the region.

On Tuesday, a Syrian force infiltrated the area of al-Qaa in Lebanon and remained in the region for some 20 minutes.

Since the start of anti-regime protests in Syria in March 2011, Syrian troops have repeatedly infiltrated Lebanon’s eastern and northern regions in pursuit of armed terrorist gangs.

Several Lebanese people and Syrian refugees in Lebanon have been killed or wounded in the incidents.

And the army was deployed on the border to do what? That's what I thought, a sorry ass army commanded by corrupt Syrian/Iranian slaves, starting with boot lickers like Sleiman, Miqati, berri, Qahwagi and of course the rat hiding in the sewer himself.

sad thing is that those who voted for the pro assad, pro iranian, pro war, anti western, anti tourist march 4 government would do it again in a flash. and they have yet to take any blame or responsibility for lebanon's downward chaotic state. violence, crime, assassinations, cover ups are not condemned but are now accepted and justified for their evil selfish survival.

Where is the LAF? What happened to protecting our borders? There no resistance folks but rather ASSISTANCE to Bashar and his murderers. I think this incident is a clear sign Lebanon is about to be dragged into this mess. God help the people!

See that's what I keep talking about. Our poliicians talk the talk but don't walk the walk. If we are unable or unwilling to protect our border from the Syrians then lets stay quiet and mind our business instead of provoking them. We can't afford any marjalé. We have huge problems of our own, thank you.

so now the LAF are turned into traffic police making sure the syrians dont get in traffic i guess. yeh lets all support the army while it betrays its own nation

since m8 took over, we cannot trust our army to defend Lebanon.

Not sure Geha if we can't trust them but I want to say they are only at the bottom of the chain of command. They are only as good as their leaders and as we all know....leadership we don't have. The leaders we have are under (indirect) command of HA and not until we remove that part of the equation, our army can't do crap.

Ahab I share your frustration but again.....they are only a limb of this body. Remove the cancer cells (HA) and the body will function back to normal. Hope there is time and we can save this body (Lebanon) before this cancer spreads and the rest is history.......

The magnificent heroic Syrian army is exercising it's full rights to cross an imaginary border created by the western imperialist colonial powers.

I hope such news is true...

What a bunch of looser!! They still believe assad is gonna make it!! Wouuuhahahahag

When do you (or shall we call Dr. Dreamer Geagea) think Assad will fall? Perhaps in 2012 as Dr. Kherfen Wmouderyen lately re-re-re-re-re-re-re-predicted or could it be 2015? Wouuuuuhahahah

Where is the baked beans resistance? The resistance that only attacks a TV Station in Beirut, or the resistance that tried to invade the Chouf Mountains and failed even with the help of Irianin`s.I have one thing to say to my follow Lebanese brothers and sisiters dont fear Hezb Iran they are full of hot air .God bless Lebanon and help rid our beloved country from all sorts of import and local scum ..

Thanks to our leaders, Lebanon's sovereignty does not mean a thing to Syria. The lack of Leadership and Skill among the Lebanese brings about the same slate of corrupt parliamentarians over and over again. When will the people really wake up and topple this corrupt lackluster Elite??
Until then, there should not be any Independence Celebration..

Resistance my back side. Hizb propaganda overshadows Israel's