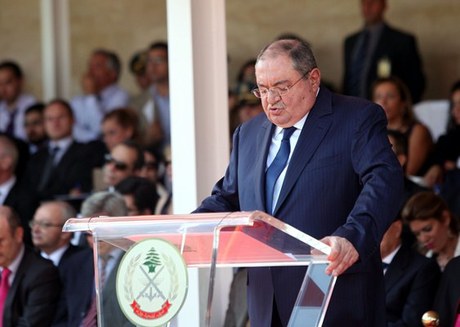 Defense Minister Fayez Ghosn considered on Monday the cabinet's decision to equip the Lebanese army a “strong moral boost,” stressing that the military institution was able to control the security chaos across Lebanon.

“The decision helps the army carry out the tasks assigned to it across the country,” Ghosn told As Safir newspaper.

The minister noted that he has been seeking the government's approval on this plan since he first assumed his responsibilities as a defense minister, hoping that the parliament would swiftly approve it.

The Cabinet approved last week a 1.6-billion-dollar plan to provide the Lebanese army with the necessary equipment and arms. The payments will be made over a five-year period.

Ghosn admits that the funds are not enough to properly equip the military institution, expressing hope that the foreign aid for the army will help it advance.

“The donor nations will soon hold a meeting to provide Lebanon with the necessary help in various fields,” he said.

According to the minister, the importance of such a decision is that “all the cabinet members agreed on it.”

He hailed the stances taken by President Michel Suleiman and Prime Minister Najib Miqati over the matter.

Asked about the raids carried out by the army across Lebanon to detain outlaws, Ghosn said that “it is working on resolving the security chaos one step at a time. The Intelligence Branch is exerting efforts to arrest those who are violating security in the country.”

“The army is controlling all the areas across Lebanon,” he added.

The army recently launched a crackdown on assailants in Beirut's southern suburbs and several other areas in an attempt to halt a kidnapping spree of several businessmen and stop numerous bank robberies.

The first thing to do to make our army even stronger is to appoint a strong defense minister...this guy needs to go home now!!!

Air defense is the most important thing :)

Indeed it's a small amount, but it is the first time since 1983 that a decision has been taken to buy arms for our army. That is 29 years!

The situation in Syria will remain volatile for many years to come and we need the army to control the border and defend our citizens.
Donor countries like the US, France, UAE and KSA will play a major role, specially when they see that we are serious now and may provide aid of better quality.

if the army is to get stronger the only solution is to take the command of hezbollah s military wing! no other solutions are possible...

how can a party be stronger than the national army? the presence of it only weakens the army and the state...

Great move to correct the incompetency and failure of Aoun when he lead the army. You boost the morale and arm the Leb Army versus going on public TV to tell the world that the Leb Army is incapable to protect us from the Zionist and that's why we need the militias.