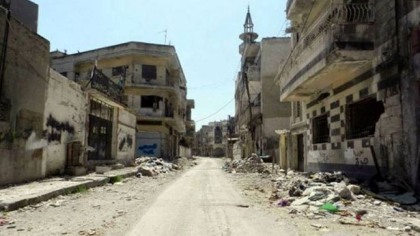 A shadowy Islamist group, Al-Nusra Front, said it is holding five Yemeni army officers allegedly sent to Syria to help fight an 18-month uprising, in a video posted on the Internet on Sunday.

The four-minute video posted on jihadist forums shows the men it says are being held in northern Syria.

It shows the Yemeni army IDs of the five men who condemn the "crimes" committed by President Bashar Assad's regime against Syrians and the Sanaa government's support for Damascus.

The men -- named as Ali al-Salama, Mohammed Abdo al-Mlaiki, Hani Nizar, Hassan al-Wahib and Ahmed Radman -- say they were serving in the northern city of Aleppo, a key battleground.

"I came after coordination between the Yemeni and Syrian governments to crush the Syrian revolt," says Mlaiki, who like the four other officers is seen sitting below a black flag on which "Al-Nusra Front" is written in Arabic.

"I call on the Yemeni government to cut off all military and logistic relations (with Syria) because President Bashar Assad's regime kills its people, and this is what we saw with our own eyes in many Syrian regions."

It was unclear when the men were detained or when the video was taped.

Al-Nusra has claimed the majority of suicide attacks during the anti-regime revolt in Syria, including a twin suicide bombing in Damascus in May that killed 55 people.