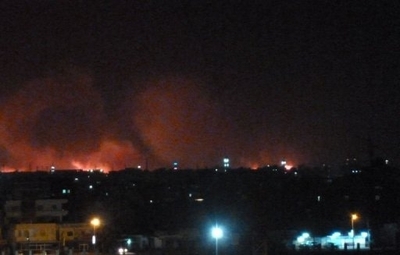 Sudan on Wednesday accused Israel of bombing a military factory and threatened retaliation after the attack that killed two people.

"We reserve the right to react at a place and time we choose."

He said four aircraft were involved in the attack, which occurred at about midnight (2100 GMT) Tuesday at the Yarmouk military manufacturing facility in south Khartoum.

Evidence pointing to Israel was found among remnants of the explosives, he said.

The foreign ministry of Israel, which has long accused Khartoum of serving as a base for militants from the Palestinian Islamist group Hamas, refused to comment.

Earlier on Wednesday, residents said an aircraft or missile flew over the factory shortly before it exploded and burst into flames, but a top official had dismissed their comments.

An Agence France Presse reporter several kilometers (miles) away saw two or three fires flaring across a wide area, with heavy smoke and intermittent flashes of white light bursting above the state-owned facility.

"I heard a sound like a plane in the sky, but I didn't see any light from a plane. Then I heard two explosions, and fire erupted in the compound," said an area resident who asked to be identified only as Faize.

Witnesses said the explosions started at about midnight on Tuesday.

"I saw a plane coming from east to west and I heard explosions and there was a short length of time between the first one and the second one," she said, asking not to be named.

"Then I saw fire and our neighbor’s house was hit by shrapnel, causing minor damage. The windows of my own house rattled after the second explosion."

Abdul Rahman al-Khider, the governor of Khartoum state, told official media that preliminary investigation found that the explosion happened in a store room.

He dismissed speculation that "other reasons" caused the incident.

Khider said some people were hospitalized because of smoke inhalation but he gave no numbers.

Army spokesman Sawarmi Khaled Saad was quoted by the state's SUNA news agency as saying the fire occurred at an ammunition facility in the Yarmouk complex.

The blaze spread to a neighboring area of grass and trees, he said, adding that an investigation was underway to find the cause.

In 1998 Human Rights Watch said that a coalition of Sudanese opposition groups had alleged that Sudan stored chemical weapons for Iraq at the Yarmouk facility but government officials strenuously denied the charges.

In August of that year United States cruise missiles struck the al-Shifa pharmaceutical factory in North Khartoum, which the U.S. said was linked to chemical weapons production. Evidence for that claim later proved questionable.

A source familiar with the Yarmouk factory said its main compound and storage area had not been damaged by the explosions or fire.

Hannan, a resident who gave only one name, said some people had fled the area on foot because of the early-morning explosions, while others put their children in cars ready to make a getaway.

The fires appeared to be extinguished by 03:30 am (0030 GMT), more than three hours after they began, an AFP reporter said.

There have been other mysterious blasts in Sudan.

On the country's Red Sea coast in May 2011 one person was killed when a car exploded, about a year after Sudan blamed Israel for an air strike on a vehicle in the same area. Witnesses to the May incident said they heard a big blast that set the car ablaze and left two holes in the ground.

A September report from the Small Arms Survey, a Swiss-based independent research project, said evidence from weapons packaging suggests that Chinese-origin arms and ammunition are exported to the Yarmouk facility.

From there they have subsequently moved to Sudan's far-west Darfur region which has been plagued by conflict for almost a decade, the report said.

Small Arms Survey said it was not clear whether Yarmouk served simply as a recipient "or whether they repackage or even assemble the Chinese-made weapons."

Khartoum is seeking the removal of United States sanctions imposed in 1997 over support for international terrorism, its human rights record and other concerns.

Well, once again, you continue with your outlandish claims that everything that happens in the Middle East it is Israel that did it.
Wake up, mate, things happen out there without Israeli intervention.

Well, once again, you continue with your outlandish claims that everything that happens in the Middle East it is Israel that did it.
Wake up, mate, things happen out there without Israeli intervention.

stupid comment of brainless M8... when aoun says that you need investigation before accusing you agree, here because UN says nothing you disagree... what a twisted logic you have...

what s good for you is bad for the others: you sum up all the philosophy of FPM and M8...

oh look at how he gets nervous while i was just talking of your attitude and didn t even comment this news...i didn t say israel didn t do it, i didn t say sudan is lying!
only in your FPM mind you see what you only want to see...if i said the sun rises east you d shout "no it rises west!" only to try to prove you are right!
see how nervous you are as soon a i address your pathetic person!!!! hahahaha!
you are too comic trying to deny you idiotic logic!
as i said and repeat what is good for you is not acceptable from others... LOL!
when M14 accuses syria you say "hey! we need an investigation before jumping to conclusions", but UN takes a little time to assess what sudan says and you cry like a little M8 virgin... soooooo laughable claoun!
hey girlie calm down!

just take time to think about yourself... and see how blinded you are!

LOL and big LOL... funny how you answer me with facts when i didn t even comment this piece of news... didn t even mention israel! didn t even defend them! as you know they are my enemies too in case you still don t know ( oh! yes, you always forget to read this part to accuse me of being an israeli ally because it fits the BS of yours...)

i commented on your stupid attitude that s all... :)

If khartoum wants a resistance, we have one. They can have it. But on condition they dont return it.

We'll throw in the FPM for free if they act fast

We'll throw in the FPM for free if they act fast

philipo it almost feels as if you were offended by claims against israel. are you even lebanese?

U should be since you only read partially, blinded by some sort of ego / megalomania that i still can't figure out. read again ya outlandish enta, FT did not even make a claim.

Here we go again with accusations against the peaceful, friendly and harmless Israel! March 14, you should put an end to such a charade of ridiculous accusations. So get together you example of Middle Eastern warriors and with one voice shout after me: Down with Assad. Down with Iran. Down with Hizbullah. Down with Sudan. Down will all the forces of evil and backwardness and Wilayat al Faqih nonsense and these Persian, Farsi terrorists who are killing innocent people everywhere, especially by sending suicide bombers all over the world. Oh, sorry guys, remove this last phrase as these acts are the specialty of the Sunni crazies, aka the friends of the lovers of life and freedom and democracy. So get together and do the shouting. Go, go, go, go, go warriors of the new Middle East.

Lol THAT you know. In another continent in a place where conflict happens regularly etc.

However come lebanon, where you supposedly live and where you experienced the war and syrian occupation according to your previous posts, you can't point the finger at anyone la2enno khallo el te72i2 yekhoud majra.

Hey Sudan you lost 1/3 of your country, and 75% of your oil. Now you are going to retaliate?? Your problem is your alignment with the Iran axis.

lol as much as you want...
now your pathetic person can wait and see then what UN has to say as you say it s been confirmed! after you can shout... see the difference?
you think UN will make a statement on rumours prior to a confirmation?

i m just telling you this so that next time you do not behave like the ones you criticize and look more credible when you speak! ok baby?

as a person who pretends to know everything, and as a believer in Jesus Christ, then you should know to behave better than the ones you fight against! and set the example and give a good image of the ones you defend...
otherwise you appear not credible a second! understand?

oh! and no need to answer and insult me, as i am the evil one who is against M8, you already know how low, delusional, stupid, sold to wahabis and brainless we are..
but it it makes you feel good then be my guest!

Ft Next time you visit a hairdresser ask him to trim your ears as well as your hair .