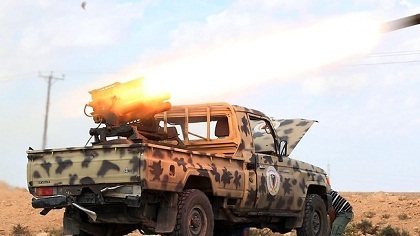 Libya's defense minister said Monday that the army has no control over Bani Walid, one of the last bastions of Moammar Gadhafi's regime, and that armed groups there prevent families from returning home.

"The chief of staff has no control over the town and therefore armed men are able to prevent families from coming back," Osama al-Jueili told journalists in Tripoli, adding that "gunmen" hold a checkpoint leading to the town.

Fighting in Bani Walid this month displaced tens of thousands of people, Jueili noted, including 30,000 who fled to the nearby town of Tarhuna and 10,000 who went to the capital.

"The town is completely empty except for a small number of people who are living in tragic conditions; there is no activity; the impact of shelling is visible everywhere," the minister said.

Jueili had previously made no public statements on the situation in Bani Walid.

His bleak assessment came five days after the army chief-of-staff officially announced the end of all military operations in Bani Walid, which was branded by the authorities as a hideout for criminals and former regime loyalists.

Bani Walid, 185 kilometers (115 miles) southeast of Tripoli, was one of the last towns to fall to NATO-backed rebels in the 2011 conflict that toppled and killed Gadhafi.

October's scaled-up offensive against the oasis came in response to the death of Omran Shaaban, 22, a former rebel from the city of Misrata who was credited with capturing Gadhafi and later kidnapped in Bani Walid.

The operation was sanctioned by the new authorities and carried out by former rebel brigades linked to the army, including fighters from Misrata, which has a long history of rivalry with Bani Walid.

Tribal elders and commanders in the town had repeatedly called into question the neutrality of the army, which is still being formed, and accused "lawless Misrata militias" of seeking to destroy Bani Walid.