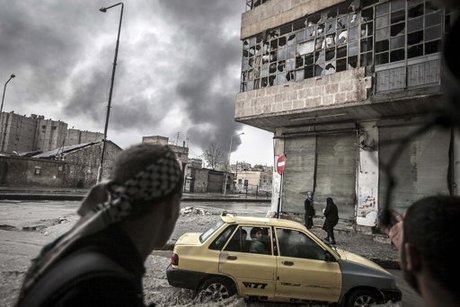 The fresh violence came after the feast of Eid al-Adha came to a close on Monday, with 560 people, including 235 civilians, reported killed during a failed ceasefire attempt over the four-day Muslim holiday.

"Clashes broke out overnight in Al-Hajar Al-Aswad district between rebels and the army, spreading into the adjacent Yarmuk Palestinian camp. The Popular Front for the Liberation of Palestine-General Command joined on the side of the army," the director of the Syrian Observatory for Human Rights watchdog, Rami Abdel Rahman, told AFP.

"Every time the fighting spills into Yarmuk, the General Command gets involved," said Abdel Rahman.

The Syrian Revolution General Council, a network of activists on the ground, also reported that heavy fighting erupted between the Free Syrian Army and members of the PFLP-General Command in Yarmuk.

The Yarmuk district is home to more than 112,000 Palestinians, who are divided over the 19-month revolt that has left 35,000 dead in the country.

In early August, Palestinian President Mahmud Abbas condemned shelling on the camp, which killed 21 civilians, and also chided the PFLP-GC for its role in dragging Palestinians into the bloody conflict.

Elsewhere in Syria on Monday, the military renewed shelling attacks on the northern city and province of Aleppo, the central city of Homs, the southern province of Daraa and the northwest province of Idlib, the Observatory said.

Regime warplanes made two air strikes on the Idlib town of Maaret al-Numan, where fighting has raged since the rebels overran the town on October 9 cutting off a key army supply route along the Aleppo-Damascus highway.

Fierce clashes south of the town on Monday left two soldiers killed, while battles erupted around the nearby Wadi Daif army camp between troops and rebels, including fighters from the jihadist Al-Nusra Front, the Observatory said.

Regime helicopters meanwhile dropped three barrel bombs on the nearby village of Maarshmareen, which also came under artillery fire from troops stationed nearby.

The Britain-based Observatory relies on a countrywide network of activists, lawyers and medics in civilian and military hospitals, and says its tolls take into account civilian, military and rebel casualties.