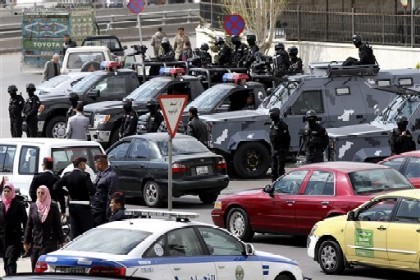 Jordan police on Tuesday were detaining 61 Syrians who were traveling in three trucks near the southern town of Maan, an Islamist stronghold, a statement said.

"A police patrol in Maan governorate seized today three trucks carrying 61 Syrians, who are now in detention. The drivers were arrested too," a Public Security Directorate statement said.

"Investigations are under way to find out more information about them and why they were traveling in these trucks," it said without elaborating.

Maan has a bloody and rebellious past that goes back to the turn of the last century, when the town was the seat of the Great Arab Revolt that crushed the Ottoman rule.

Jordan, which says it is hosting 200,000 Syrians, arrested last week seven Syrians for carrying 35 "advanced" walkie-talkies, which are banned in the kingdom, as well as other equipment.

The arrests came after Amman's announcement it had foiled a "terrorist plot" and arrested 11 al-Qaida suspects who planned to carry out suicide attacks against shopping malls, foreigners and diplomatic missions in the kingdom.

Amman has beefed up security along the border with Syria, since the uprising against President Bashar Assad's regime erupted in March last year.