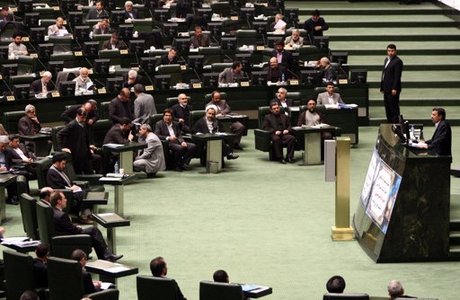 Iran's parliament on Sunday summoned President Mahmoud Ahmadinejad for a grilling over his handling of last month's currency crisis which saw the rial plunge 40 percent against the dollar, state media said.

A total of 77 deputies in the 290-seat conservative-dominated parliament submitted a petition requiring Ahmadinejad to explain the "government's procrastination in managing the forex market," official IRNA news agency said.

According to the constitution, a petition demanding that the president come to the majlis, or parliament, to answer questions must be signed by a minimum of 74 deputies.

The president now has one month to appear before the deputies with his replies.

The petition submitted on Sunday says that rial fell from 22,000 to 40,000 against the dollar in the space of 20 days last month, "due to Central Bank inaction ... which caused inflation along with economic slowdown, disrupting the activities of the economic players."

The collapse of rial is being seen by economists as one of the consequences of banking and oil sanctions slapped on Iran by the United States and the European Union for its refusal to give up its uranium enrichment program.

Tehran is also under four sets of U.N. Security Council sanctions over its disputed nuclear drive, which world powers believe has a military dimension despite repeated denials by the Islamic republic.

The sanctions have seen Iran's oil exports tumble and at the same time have made it more difficult for Tehran to receive petrodollars, leading to a shortage of foreign currency in the market.

The embargoes have also made it more difficult and expensive to import goods, while causing a rise in inflation and a slowdown in industry and commerce.

After long denying the impact of these measures, Iranian leaders are now beginning to acknowledge the extent of the damage and denouncing what they say is an "economic war" against the Islamic republic.

The parliament, critical of Ahmdinejad's policies and his handling of the economy, had also summoned him in March, the first time since the 1979 Islamic revolution that it had resorted to such action.

The summoning for questioning has no political consequences for the president.

Is there a chance (wishful thinking) that the parliament will fire Ahmedinijad?

the sanctions seem to be producing an effect, not enough yet, but they are doing something.
will it be enough to create internal unrest? this is the main question.
if they do, then iran will implode from within.