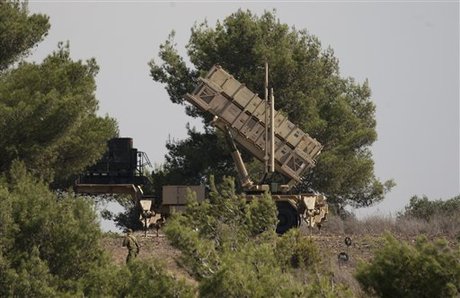 The Israeli air force has successfully tested an upgraded version of its "Iron Dome" missile defense system, the defense ministry said on Sunday.

"This test constitutes a new success in the project to strengthen the Iron Dome's performance," Defense Minister Ehud Barak said in a statement.

"Israel has invested an enormous budget to finance the different missile defense systems that should allow us to protect the whole of our territory within a few years," he added.

Israeli television said the latest version of the Iron Dome is designed to intercept medium-range missiles, such as those possessed by Syria and Hizbullah.

The first Iron Dome battery was installed in March 2011 near Beersheva in the Negev desert region, 40 kilometers (25 miles) from the Gaza Strip, and has intercepted more than 100 rockets since then.

Southern Israel is regularly targeted by rocket attacks from Palestinian Hamas-controlled Gaza, to which it often responds with air raids.

Each battery has radar detection and tracking system, a firing control system and three launchers for 20 interception missiles. They have a range of four to 70 kilometers (2.5 to 44 miles).

Military experts say 13 batteries are needed to be defend the whole of Israel's territory, an arsenal that will take several years to build up. Israel says it has invested $1 billion in the project.

The Iron Dome system is developed by Rafael Advanced Defense Systems, a public arms company based in the northern town of Haifa, and part-funded by the United States.

The Israeli missile defense program includes other systems, including Arrow, which is for ballistic missiles, and David's Sling, for medium-range attacks.