U.N. Calls on Myanmar to Offer Citizenship to Muslim Rohingya 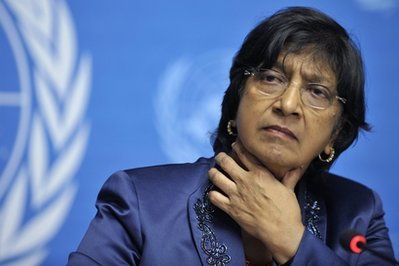 The U.N. human rights chief called on Myanmar Friday to allow Muslim Rohingya to become citizens after deadly sectarian violence in recent months in the western state of Rakhine.

The group's statelessness is at the heart of two major outbreaks of unrest between Buddhist and Muslim communities that has left 180 dead and forced more than 110,000, mainly Rohingya, into makeshift camps since June.

The Rohingya have no legal status, with the government and many Burmese regarding them as illegal immigrants from neighboring Bangladesh.

U.N. High Commissioner for Human Rights Navi Pillay added her voice to calls for the problem to be resolved and urged a change in the law, saying the Rohingya had been excluded from the reform process.

"This should include a review of the citizenship law to ensure that Rohingya have equal access to citizenship," Pillay told Agence France Presse at the Bali Democracy Forum in Indonesia.

She also warned that the violence could hinder Myanmar's much-heralded reform drive.

"While we can positively commend the government for the progress made towards democratic transition and national reconciliation, the communal violence, if not resolved, can undermine the reform process," she said.

Local authorities in Rakhine told AFP Wednesday they had begun a process of verifying the nationality of all the state's Muslims, amid widespread calls for those deemed "illegal" to be sent to another country.

The precise goal of the survey was unclear.

The 800,000 Rohingya in the state are considered by the U.N. to be one of the most persecuted minorities in the world.

Separately, Pillay said she pressed Myanmar's Deputy Foreign Minister U Thant Kyaw at the Bali meeting to secure the release of a local U.N. refugee agency employee detained in Myanmar for almost five months. He gave her no response.

"If the government detains U.N. people carrying out their professional functions, it doesn't sit very well with their reform agenda," she said.

Vivian Tan, a spokeswoman for the United Nations High Commissioner for Refugees, told AFP that the agency had asked Myanmar for details of the charges but received no response.

Other U.N. aid workers were detained earlier this year over their alleged roles in the sectarian unrest, but have since been released.