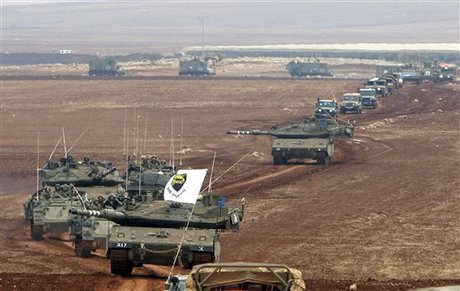 Israeli troops fired tank shells into Syria on Monday in retaliation for a mortar round that struck near an army post in the Golan Heights, scoring "direct hits" on the source of the fire, the army said.

"A short while ago, a mortar shell hit an open area in the vicinity of an IDF (army) post in the central Golan Heights, as part of the internal conflict inside Syria, causing no damage or injuries," it said.

"In response, IDF soldiers fired tank shells towards the source of the fire, confirming direct hits."

The army warned that any further fire from Syria towards the Israeli-occupied sector of the strategic plateau, would be answered with "severity."

"Fire emanating from Syria into Israel will not be tolerated and shall be responded to with severity," a statement said, indicating that Israel had filed a complaint with UN observers monitoring the ceasefire line.

Thanks naharnet for providing the propaganda picture of the Zionist Terrorist Forces. Maybe one day you can do the same for the Lebanese army, because you're a Lebanese publication.. or are you?

And maybe obe day Hezbollah-supporters can wave Lebanese flags, because you`re a Lebanese party.. or are you?