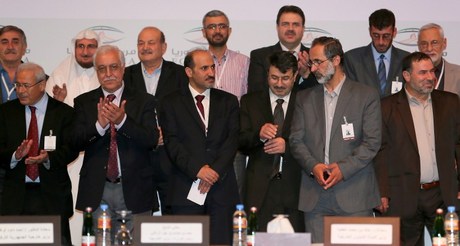 The six Gulf states recognized a newly formed opposition bloc as the Syrian people's legitimate representative on Monday, as border violence stoked fears of a spillover of the country's 20-month conflict.

The Gulf Cooperation Council move came a year to the day after the Arab League suspended Syria's membership, and as the National Coalition met Arab foreign ministers in Cairo buoyed by the hard-won unity deal.

Deadly fighting flared, meanwhile, on Syria's border with Turkey and Israel fired across the ceasefire line on the Golan Heights for a second day, scoring direct hits on the source of a mortar round that struck the Israeli-occupied half of the disputed territory.

"The states of the council announce recognizing the National Coalition... as the legitimate representative of the brotherly Syrian people," GCC chief Abdullatif al-Zayani said.

The oil-rich bloc would support the coalition "in order to achieve the aspirations of the Syrian people in hope that this will be a step towards a quick political transfer of power," Zayani said.

He hoped its formation would lead to ending the bloodshed and "a general national congress to pave the way to build a state ruled by law and open to all its citizens."

His minister of state for foreign affairs, Khaled al-Attiya, said recognition would remove any obstacles to the opposition securing arms for rebel fighters.

The National Coalition's newly installed leader, Ahmed Moaz al-Khatib, told al-Jazeera television it already had promises of weapons, but did not say from whom.

Under Sunday's deal, the opposition agreed to establish a new supreme military council to take overall command of rebel groups on the ground and address U.S. concerns that weapons have been reaching jihadist groups that are threatening to hijack the uprising.

Washington swiftly declared its backing for the new structure.

"We look forward to supporting the National Coalition as it charts a course toward the end of Assad's bloody rule and the start of the peaceful, just, democratic future that all the people of Syria deserve," State Department spokesman Mark Toner said.

Traditional Damascus ally Moscow gave a cooler response, saying "such alliances must act based on a platform of peaceful regulation of the conflict by Syrians themselves, without interference."

Fanning international concerns about the potential a conflict spillover, the Israeli army targeted the source of new mortar fire into the part of the Golan it occupies and reported "direct hits" on Monday.

On Sunday, an Israeli warning shot -- its first across the U.N.-monitored ceasefire line since the 1973 Middle East war -- left U.N. chief Ban Ki-moon "deeply concerned by the potential for escalation," his spokesman said.

Air strikes and shelling of rebel positions in the town of Ras al-Ain on the Turkish border killed at least 12 people, said the Syrian Observatory for Human Rights.

One bomb exploded less than 150 meters (yards) from the border, with the blast blowing out windows in houses in Ceylanpinar, where there were also injuries, the Turkish town's mayor told Anatolia news agency.

The same blast killed four Syrians and wounded scores of others, around 20 seriously, Anatolia said, later adding that six of the wounded died.

The Observatory said seven rebels and five civilians were killed.

Near the town, helicopters strafed rebels who for the past three days have besieged an army post, said the Observatory.

Warplanes also bombed rebel positions on the strategic highway between Damascus and second city Aleppo, while clashes on the southern outskirts of the capital near a Palestinian refugee camp killed seven civilians.

At least 52 people were killed nationwide on Monday, said the Observatory, which has given an overall death toll of more than 37,000 since March 2011.

Not good news for the butcher Assad and his cronies (includes Ahmadinejad, Ayatollah, Nasrallah, Aoun and Putin). More international recognition is coming from Europe and the rest of the civilized countries.

Next step is more and better arms for the Revolutionaries. More Stingers on their way! Then comes the "no fly zones".

The revolution will be televised!

I am with people-power. Soon all countries will pull out their ambassadors, then kick out the thug ambassadors. Then the stingers will pinck ASSad hard.

March 14, congratulations for a job well done by the Syrian people ruling the Gulf! Now I can safely say that gabby's prediction and that of Dr. Arreet 7akeh that the Assad regime will be finished by 2012 has finally materialized! Wow! Finally, THE ASSAD REGIME IS OVER. I hope cheikh Saad al-Haribi Telteyn al-Marajil heard this great news. Perhaps he can finally book his return trip to the homeland through Damascus airport! Now, how you can bear the absence of such a strategic, bright and courageous leader is beyond me, and more so that of Oqabo. But hey, I know that warriors like you have been in worse situations and more difficult experiences. May god give you patience and perseverance. Keep hope alive, my compatriots, my only hope for a great future for all Lebanese Lebanese free of non-Lebanese Lebanese imposters.

There are no true Democracies in the Middle East and we all know that. But as a Lebanese I want the Syro/Iranian influence out of Lebanon. We do not want them using Lebanon and harming the Lebanese for their gain.

What about those being butchered in Bahrain.. are they from the wrong sect for the international community to care? Oh wait, Bahrain are one of those recognizing the opposition... hmm. Hypocrisy at its best.

One thumb down so far to Ezzo's comment by someone with high moral standards! Typical of March 14 revolutionaries who, as they say (and when they say we must believe!), triggered the other revolutions! Spin babies, spin.