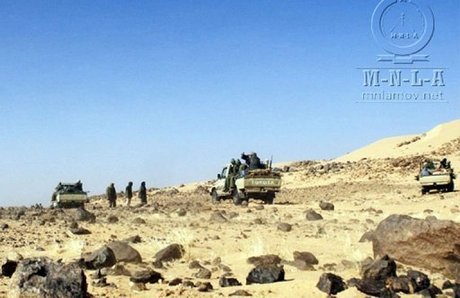 Mali's Islamist rebels Ansar Dine and Tuareg leaders controlling part of the desert north of the west African country announced jointly Friday that they are prepared to hold talks with the Bamako authorities.

The two groups were "disposed to engage resolutely in a process of political dialogue" they said in a joint statement after talks with lead negotiator Burkina Faso President Blaise Compaore.

Compaore, lead negotiator for the west African regional bloc ECOWAS met jointly with Ansar Dine (Defenders of Faith) and the National Movement for the Liberation of Azawad (MNLA) for the first time on Friday.

The meeting, in his Ouagadougou palace, marked a change in approach by Compaore, who had previously received them separately.

The Ansar Dine delegation was led by Algabass Ag Intalla, one of the Al Qaida-linked group's top leaders, while the MNLA was represented by its secretary general Bilal Ag Acherif.

The fresh drive by Mali's neighbor Burkina Faso to find a negotiated solution to the crisis, which has effectively split Mali in two, came as plans by ECOWAS to send troops in gathered pace.

The aim of the meeting was to get the two sides, who have held informal discussions in the Burkina capital for several days, to hammer out a "joint platform" to present to Mali's transitional authorities.

This interim administration has been running the country since the leaders of the March military coup stepped back from power under international pressure, in April.

Ansar Dine and the MNLA, both made up mainly of Malian ethnic Tuaregs, have occupied northern Mali along with mainly foreign radical Islamists since April.

The Islamists belong to al-Qaida in the Islamic Maghreb (AQIM) and the less known but associated Movement for Oneness and Jihad in West Africa (MUJAO). Both groups have imposed a brutal form of sharia Islamic law, stoning unmarried couples, amputating thieves' hands and whipping drinkers and smokers.

Ansar Dine has made some conciliatory gestures to the secular MNLA, notably announcing this week that it would not insist on sharia law across Mali but just in its northeastern fiefdom of Kidal.

It has also said it would work to help rid the region of "terrorists" and "foreign movements", thereby distancing itself dramatically from AQIM and MUJAO.

Ansar Dine has also regained favor with the international community by renouncing its separatist ambitions.

The repositioning makes it increasingly likely that the ECOWAS intervention would focus on dislodging AQIM and MUJAO, in the hopes of eliminating a potential sanctuary for international extremist groups.

The planned force, approved by the African Union, will comprise some 3,300 mainly west African troops. The plan must go before the U.N. Security Council by the end of November.

But question marks still hang over the operation, particularly its exact composition and its financing. It will also require logistical support from countries such as France and the United States.

The European Union also wants to support the effort. Its foreign ministers will meet Monday in Brussels to discuss sending a training mission made up of 200 to 400 European soldiers to Mali in January, according to French sources.

But the international community has made clear it favours dialogue to resolve the crisis.

Also Friday, in the Malian capital Bamako, some 400 police officers staged a protest demanding better working conditions following the abduction of four of their colleagues.

In September a clash between police officers angry over some controversial promotions up the ranks -- of members close to the military junta that overthrew president Amadou Toumani Toure in March -- left two injured.