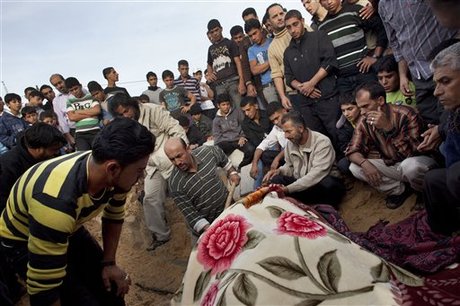 Pakistan on Friday condemned Israeli air strikes on the Gaza Strip and vowed to stand by the people of Palestine against "Israeli aggression".

"Pakistan strongly condemns Israeli air attacks in Gaza that have targeted not only the Hamas leadership but also innocent civilians," Pakistan's foreign ministry said in a statement.

"An escalation in the violence could lead to a spreading of the conflict to engulf the region," it warned.

There are no diplomatic relations between Pakistan and Israel and the foreign ministry said it has "consistently extended unequivocal and unreserved support to the Palestinian cause".

"While talking to President Morsi, the prime minister said that unless the Palestinian problem is resolved, peace in the Middle East will remain elusive," it said.

Israel on Wednesday launched its harshest Gaza operation in four years by killing the Hamas military chief, Ahmed Jaabari, in a surgical air strike on a car traveling in Gaza City.

Since when is it a grave violation of international law to react when your civilian cities are being rocketed by terrorists.
Pakistan should remember that it is they who continues to give shelter to the Taliban and allowed its leader Ben Laden to live there for years, in violation of international law, and refuses to allow other countries to operate from its territory in trying to wipe these terrorists out.

Isreal is real Nazism
Isreal has no right to exit, should be wiped out and all Israeli should be treated as slaves.
Mr Obama president of States was not in right state of mind when saying Isreal has right
to defend. Right to defend and using American jets to kill innocent civilians and children
in occupied Gaza.
Israel show not forget has it will get reap what you sow.

This is only a lip service like some other countries do only for the record. Well why dont they fight Israel instead of these lip services.