In Syria, a Fine Line between Jihadists and Rebels 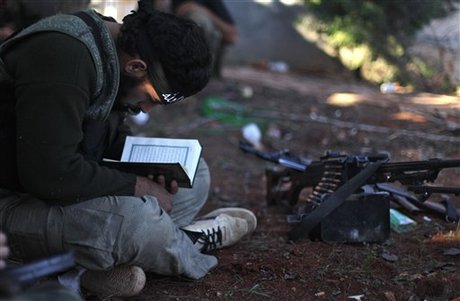 The influence of hardline Islamists is increasingly being seen on Syria's battlefields, with even the more secular rebel fighters starting to sport jihadist-style beards, headbands and clothes.

The trend is confusing the West and complicating the dispatch of aid, especially weapons, to the insurgents, experts say.

"It is difficult to distinguish between moderate Islamists and Salafi-jihadists in the context of the Syrian civil war," says Elizabeth O'Bagy, author of a recent Institute for War report entitled "Jihad in Syria."

"The mainstream use of jihadi iconography by non-Salafist rebel groups distorts perceptions about their ideologies and end-goals," she says.

This represents a critical, if blurry line for Western powers who remain wary of providing weapons to the rebels for fear they may fall into the hands of extremists.

According to O'Bagy, "it is significant to draw the distinction in order to understand which Islamist opposition groups are willing to work within a state system."

The past six months of the conflict have been marked by a growing Islamization of the opposition, with an increased number of hardline jihadist battalions fighting alongside more secular-minded Free Syrian Army fighters.

Fighters from the jihadist Al-Nusra Front in particular have moved to the forefront of the rebellion across many Syrian battle fronts.

"The Syrian conflict began as a secular revolt against autocracy. Yet as the conflict protracts, a radical Islamist dynamic has emerged within the opposition," says O'Bagy.

"There is a small but growing jihadist presence inside Syria, and this presence within the opposition galvanizes Assad's support base and complicates U.S. involvement in the conflict," she adds.

The vast majority of rebels are devout Muslims, who see their struggle as both a religious and patriotic duty.

But even those who are not hardcore Islamists have now adopted the ways of their more radical comrades-in-arms, as militants before them have done in Afghanistan, Iraq and during last year's Libyan revolution.

The signs are all too clear, starting with the tell-tale jihadist beard, worn thick and long and preferably with the mustache shaved off.

Pants are hemmed above the ankle, as in the days of Prophet Mohammed, and fighters sport black or green headbands inscribed with the words God, Mohammed or with the "shahada" -- the Muslim profession of faith.

Another symbolic accessory is the "sewak", a wooden stick used to brush the teeth and cleanse the mouth.

Black banners bearing the same "shahada" fly above almost all rebel checkpoints and camps, sometimes, but not always, alongside the three-starred revolutionary flag.

Many rebels have also adopted the black flag with the seal of the prophet, which was used as the banner of the "Islamic State of Iraq," the branch of al-Qaida in Iraq, or the colors of the militant al-Shabab in Somalia.

The use of Internet videos, long the propaganda tool of choice for jihadists, are also widespread among Syrian insurgents, who send their own camera crews to film the exploits of their fighters on the ground.

The presence of foreign fighters is no longer an anomaly in the conflict, which has attracted a plethora of volunteers. They range from veterans of Arab Spring uprisings across the region to hardcore jihadists, most of them allied to the Al-Nusra Front.

In mid-November, the Aleppo-based factions of many of these groups, including the powerful Al-Nusra Front, announced in a video posted to the Internet their desire to establish an Islamic state.

The slew of battalions operating from one region to another, and the fact that more secular FSA units work hand-in-hand with the Islamists, only compound the confusion for Western observers.

But there are signs that leave no room for any doubt, such as the distinctive jalabiya robe which jihadists wear, the Afghani shalwar kamiz tunic or hoods covering the face and black clothing.

But perhaps the most surefire jihadist trait is a pronounced hostility to foreign journalists, the only Western presence in Syria's embattled territories.