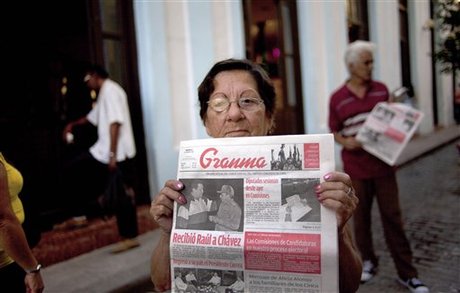 President Hugo Chavez' medical team expressed "optimism" on Tuesday as the cancer-stricken Venezuelan president prepared to undergo a fourth round of surgery in Cuba.

Communications Minister Ernesto Villegas said doctors had begun pre-surgery protocols and would operate later in the day in Havana, where Chavez had arrived on Monday after revealing that his cancer had returned.

"The medical team has transmitted its optimism about the success of this operation, which is part of the treatment plan that commandante Hugo Chavez is following to recover his health," Villegas said, in a televised statement.

Ecuador's President Rafael Correa, who visited Chavez on Monday, had earlier said the surgery was already underway, calling it "a very delicate operation."

"He is going through one of the most difficult moments of his life, this dear friend, colleague and Latin American leader, commandante Chavez," Correa said in the border town of Tulcan, Ecuador.

"Truly, he is a historic president and let's hope he comes through this health problem totally reestablished," said Correa, who was meeting with Colombia's President Juan Manuel Santos.

Chavez flew to Havana for his fourth round of surgery after revealing to his stunned countrymen Saturday that his cancer had returned just two months after his re-election to a six-year term.

Chavez, who was first diagnosed with cancer in June 2011, had assured Venezuelans that he was cancer free after three surgeries and debilitating rounds of chemo and radiation therapy.

Significant aspects of Chavez condition -- including the type, location and severity of his cancer -- have been kept secret over the past 18 months, fueling rumors and uncertainty about Venezuela's future.

But Chavez made clear before his departure to Havana that he was facing a serious setback, publicly naming Vice President Nicolas Maduro as his preferred successor for the first time.

Without formally handing over the presidency, Chavez said he was delegating the country's "high political command" to Maduro while he was gone and said the vice president would succeed him if he were incapacitated.

Under Venezuela's constitution, elections must be held within 30 days if the president dies or is incapacitated either before being sworn in to office or in the first four years of his term.

Correa, a firebrand who could succeed Chavez as leader of the Latin American left, on Monday flew to the Venezuelan's side in Havana where he found him in "great spirits."

"He gives us all strength," Correa said on Twitter, on his return to Quito.

Correa said he had also visited Cuban President Raul Castro and his predecessor Fidel Castro during his day-long stay in Havana.

With Cuba's backing, Chavez has taken the lead in forming a bloc of leftist Latin American governments that vehemently opposes the United States and has friendly relations with US adversaries like Iran.

Members of the group include Ecuador, Nicaragua, Bolivia, Venezuela and Cuba.