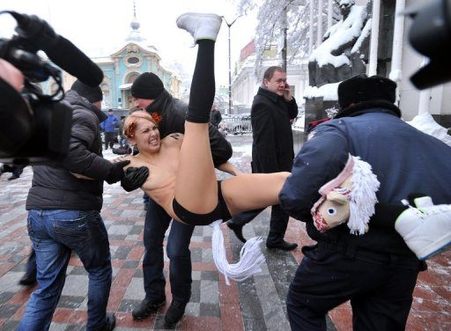 Activists from Ukraine's feminist group Femen staged a topless anti-corruption protest on Wednesday outside the ex-Soviet country's newly-elected parliament as a fight erupted between lawmakers inside.

The opening session of the Verkhkovna Rada began in a typically raucous fashion, after the October 28 parliamentary elections which were condemned by the West as a setback for democracy.

Four young women jumped over the fence surrounding parliament and stripped naked to protest outside the entrance, with only black panties protecting them from freezing temperatures, an AFP photographer witnessed.

The activists, who said on their Facebook page that they were protesting against corruption among lawmakers, were quickly detained by security guards.

In the meantime, a fight erupted in the chamber between opposition MPs and two deputies whom they accused of defecting to the pro-government camp.

Several lawmakers from the opposition nationalist Svoboda group chased two men they called "turncoats" -- a father and a son -- to prevent them from taking the oath.

It is due later Wednesday to vote on reinstating as prime minister President Viktor Yanukovych's ally, Mykola Azarov.

With support from Communists and some independent deputies, Azarov's candidature has a good chance of success, a source close to the ruling Party of Regions told the Interfax news agency.

All three opposition factions in parliament -- jailed ex-premier Yulia Tymoshenko's Batkivshchyna, boxer Vitali Klitschko's UDAR (Punch) and Svoboda -- which together hold 170 of the 450 seats, refused to vote for Azarov.

Femen specializes in topless activism, supporting women's rights and fighting prostitution and trafficking and its slogan is "We came, we undressed, we conquered".