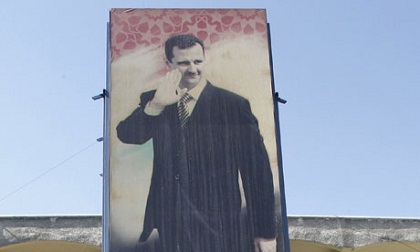 "There is a real acceleration regarding the international community focusing on Syria... real concern about the using of chemical weapons," Finance Minister Rafa al-Essawi said on the sidelines of a meeting with the International Monetary Fund in Amman.

"So I personally feel that the Syrian file and Syrian changes will take place shortly."

"I think, personally, it is weeks."

Essawi, a Sunni Muslim like the majority of Syria's rebels, said international efforts against Assad's regime appeared to be accelerating and noted that battles in the Damascus area indicated that change may be near.

"Now the battle is surrounding the Damascus airport. So being so close on Syria's position like the airport, it gives you the impression of an acceleration."

From his mouth to God's ears.

That photo looks like ASSad is waving good bye. ASSad is finished and the Hezz have lost a war.

I thought sayed hassan said that the syrian regime will not fall?!? He will probably tell his poor people ' law kuntu a3lam' that the regime would fall i would not have sent ur children on jihadi duties in 7ums. Now the she3a lebanese have to live with the fact that they made millions of enemies few miles away from lebanon.

I guess, then, that Dr. Arret 7akeh's prediction that the ASSad regime MIGHT fall in 2012 might actually materialize. That would be the only hit among 7,529 misses! What a record SHOULD it really happen. Good luck, hopeless hopefuls. And congratulations to gabby10 on the new increment. Happy 10th, and 3e2bal el miyeh. Actually, the picture really looks like ASSad is waving goodbye! Who would have figured that out? I mistook it for ASSad waving ILY! Genius, as usual, gabbaguybo!

What is it with Arabs always making predictions within weeks, within days, within hours???... How many times were the abducted pilgrims going to b set free within days within hours??? We love to act like we have secret info no1 else knows! Idiots.

More than two yrs of anti-Assad saying he's on his way out, n pro-Assad saying that nothing is going on in Syria! Kila kizib, no1 knows shit.

We're still waiting for aouns Tuesday, and nasrallahs friend in Homs is on vacation... The freedom n democracy loving salafists seem to have figured out time travel, longest "few weeks" of my life.

Now you show that you yourself and your ideology is nothing more than cowardice. You have a dictator brutally murdering people, women and children, and you say youd rather have the evil you know because you are too afraid of what might come. You dont deserve freedom my friend, you will always need someone to guide you and tell you when to jump. At least youve been doing a good job at that.

And if you think m8 will still be m8 when assad goes, it shows how near sighted you are. Just think if the fsa does take over, how much help do you think they will be giving hezballah? You dont think your general will be running to get into the first alliance that will take him?