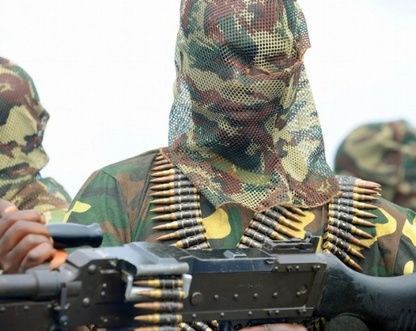 In the first attack on Friday, gunmen opened fire and threw explosives at several targets including a police station, a prison and government offices in Maiha, a northeastern town along the border with Cameroon, leaving two dead, police said.

"Two people were killed in the attack. We lost a policeman in the attack on the police station and a civilian was also killed at the government lodge," Adamawa state police spokesman Mohammed Ibrahim told AFP.

"The attackers burnt down the police divisional headquarters, a court, a satellite prison, a local education authority building and the government lodge," he said, adding that the palace of the town's traditional chief was also partially torched.

No arrests have been made, he said.

Andrew Barka, head of prisons in the state, said inmates were freed during the attack on the prison.

"The satellite prison in Maiha was broken into and burnt by the attackers. They freed inmates before setting the prison on fire. I can't say how many inmates were freed at the moment because I don't have the actual number of prisoners at the time of the attack," he said.

In a related development also on Friday, Lieutenant Colonel Sagir Musa, the military spokesman in Maiduguri, the epicenter of previous deadly attacks blamed on Boko Haram, said some gunmen killed five people in their homes outside the city.

"Information revealed that some terrorists sneaked into Musari, a village located on the outskirts of Maiduguri and secretly carried out selective killings of five people including a serving Nigerian police traffic warden," he said.

He said troops responded to the attack, arresting three suspects and recovering one AK 47 rifle with 10 rounds of ammunition.

No group so far has claimed responsibility for the deadly attacks.

Violence linked to the Boko Haram insurgency is believed to have left some 3,000 people dead in Nigeria -- Africa's most populous state and largest oil producer -- since 2009, including killings by the security forces.

Boko Haram is thought to include various factions with differing aims, in addition to imitators and criminal gangs that carry out violence under the guise of the group.

Its targets have included Christian churches as well as symbols of the establishment, including police and other security agents.

Boko Haram, which can be loosely translated from the northern Hausa language as "Western education is a sin", has claimed many attacks in northern and central parts of Nigeria.

Nigeria's population of some 160 million is roughly divided between the mainly Muslim north and the predominantly Christian south.